CDC NARMS tracks antimicrobial resistance in Salmonella and other intestinal (enteric) bacteria that may cause mild or severe diarrhea or bloodstream infection. NARMS is an interagency partnership among the U.S. Centers for Disease Control and Prevention (CDC), the U.S. Food and Drug Administration (FDAExternal), the U.S. Department of Agriculture (USDAExternal), and state and local health departments.

Bacterial foodborne infections are common and can sometimes be serious. In severe cases, the right antibiotic, also called antimicrobial agent, can be life-saving. Some antibiotics don’t work because the foodborne pathogen has become resistant.  NARMS is the only source of national information on antibiotic resistance in foodborne pathogens like Salmonella. Understanding trends in antibiotic resistance helps doctors to prescribe effective treatment and public health officials to investigate outbreaks faster. 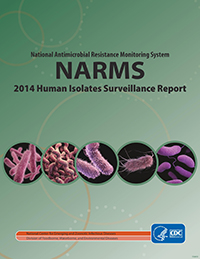 For the first time, the NARMS annual report includes whole genome sequencing (WGS) data of bacteria from people with antibiotic-resistant Salmonella infections. Genetic data provided by this sequencing can be used to identify resistance genes and predict antimicrobial resistance.

To determine trends, NARMS compared the prevalence of antibiotic resistance in 2014 with the average prevalence from two reference periods: 2004–2008 and the previous five years, 2009–2013. The 2004–2008 reference period begins with the second year that all 50 states participated in Salmonella and Shigella surveillance and all 10 FoodNet sites participated in NARMS Campylobacter surveillance. The additional 2009–2013 reference period allows comparison with more recent years. Some trends were encouraging; others were concerning.

Read the most recent report that integrates data on people, retail meats, and food animals >External 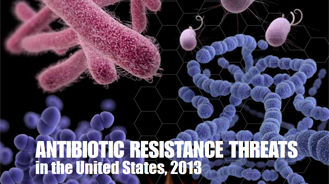 Learn about the connection between antibiotic resistance and foodborne and other enteric germs in people, foods, and animals >