Peripheral arterial disease (PAD) in the legs or lower extremities is the narrowing or blockage of the vessels that carry blood from the heart to the legs. It is primarily caused by the buildup of fatty plaque in the arteries, which is called atherosclerosis. PAD can happen in any blood vessel, but it is more common in the legs than the arms.

What are the risk factors for PAD?

Both men and woman are affected by PAD; however, African Americans have an increased risk of PAD. Hispanics may have similar to slightly higher rates of PAD compared with non-Hispanic white people. Approximately 6.5 million people age 40 and older in the United States have PAD.1

Other health conditions and disorders of arteries can mimic the symptoms of PAD, and not all PAD is due to atherosclerosis.2,3

If you have PAD, you are at risk for developing coronary artery disease and cerebrovascular disease, which could lead to a heart attack or stroke.4 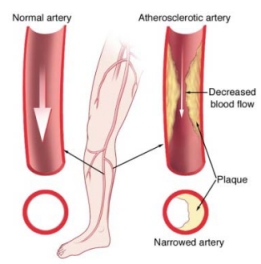 The image on the left shows a normal artery. The right shows an artery narrowed by atherosclerosis, causing PAD.

What are the signs and symptoms of PAD?

The classic symptom of PAD is pain in the legs with physical activity, such as walking, that gets better after rest. However, up to 4 in 10 people with PAD have no leg pain.1 Symptoms of pain, aches, or cramps with walking (claudication) can happen in the buttock, hip, thigh, or calf.2

Physical signs in the leg that may indicate PAD include muscle atrophy (weakness); hair loss; smooth, shiny skin; skin that is cool to the touch, especially if accompanied by pain while walking (that is relieved by stopping walking); decreased or absent pulses in the feet; sores or ulcers in the legs or feet that don’t heal; and cold or numb toes.2,3

How can I prevent PAD?

If you have PAD, participating in supervised exercise training programs can improve and prolong your ability to walk longer distances.

How is PAD diagnosed?

If you have symptoms of PAD, your doctor may do an ankle brachial index (ABI), which is a noninvasive test that measures the blood pressure in the ankles and compares it with the blood pressure in the arms at rest and after exercise. Your doctor may also do imaging tests such as ultrasound, magnetic resonance angiography (MRA), and computed tomographic (CT) angiography.1–3

How is PAD treated?