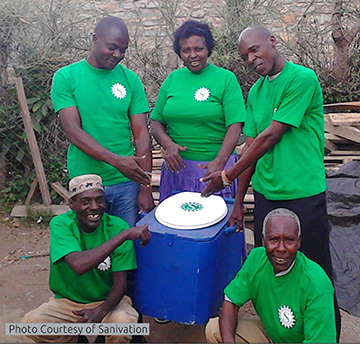 Have you ever stopped to think about how many times you use a toilet each day? We often take it for granted that when we “need to go,” a toilet will be nearby. However, throughout the world, an estimated 2.5 billion people lack basic sanitation—which means they do not have access to toilets or safe latrines, or to services such as garbage collection and wastewater treatment and disposal. Without toilets or latrines, people who “need to go” have no other option than to relieve themselves on open land or in bodies of water. This can lead to contamination of a community’s drinking water source, making the water unsafe to drink.

CDC is committed to increasing access to basic sanitation services, especially in underdeveloped countries where resources are limited. When a start-up group of recent university graduates approached CDC with an innovative idea—to provide toilets in households in need and use the human waste to make fuel briquettes—a new, collaborative partnership began.

Established in 2011, Sanivation installs toilet facilities in Kenyan households for free to subscribers who pay a small monthly fee that guarantees on-call and twice weekly visits by Sanivation service representatives. The representatives collect the waste, and Sanivation treats it with solar thermal energy to create low-cost briquettes for cooking and heating homes. The briquettes are replacing traditional charcoal, preserving approximately 88 trees per ton sold. The briquettes burn longer than standard coal and may let off less particulates, leading to less pollution and better public health. The company plans to expand to other parts of East Africa with the goal of serving over 1 million people by 2020.

CDC first teamed up with Sanivation in 2013 with the support of a CDC Innovation Fund Award. The Award allowed CDC staff to help Sanivation examine how well and under what conditions (such as temperature and time) solar thermal treatment kills microbes in human waste. It also provided funding for a pilot project in the Kakuma refugee camp in Northern Kenya. The pilot helped the group determine that the model of in-home toilets, waste collection, and reuse was workable in a refugee setting, where space is limited and there are a lack of cost-effective ways to treat waste.

After this successful first collaboration, CDC was able to support Sanivation with a supplemental award, which is being used to develop and refine health and safety guidelines for workers employed in global waste collection, treatment, and reuse. Having these guidelines will help companies like Sanivation expand while keeping their workers safe.

Innovative partnerships such as this one are critical for CDC to continue to work toward improving access to sanitation and hygiene services across the globe. Future projects with Sanivation include comparing whether composting toilets or solar sanitation work better to kill harmful germs in human waste. This is especially important when considering germs that are relatively resistant to inactivation, like the parasites Cryptosporidium and Ascaris lumbricoides. Another planned project will explore whether the combination of one of Sanivation’s in-home toilets with an in-home handwashing station could lead to more frequent handwashing after toileting and at other key times.