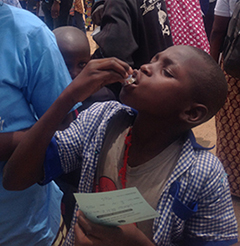 A young boy takes a dose of the oral cholera vaccine distributed in his village in northern Cameroon.

Cholera outbreaks are not new to Cameroon. Since 1971, the country has faced several outbreaks of the waterborne disease, with far north border areas being most at risk. From 2011 to 2014, Cameroon reported 26,621 cases of cholera leading to 1,031 deaths. These periodic outbreaks affect thousands of households each year and can kill as many as 10% of those who get the disease.

CDC is working with global partners to deliver oral cholera vaccine to people in Cameroon’s at-risk northeastern border villages. Earlier this year, Anne Griggs, a nurse epidemiologist with CDC’s Division of Foodborne, Waterborne, and Environmental Diseases, deployed to Cameroon for five weeks to help the country distribute more than 278,000 doses of vaccine.

Vaccines have to travel from the World Health Organization (WHO) stockpile in India via Copenhagen before being distributed to communities in Cameroon. The vaccine must stay cold from the time it leaves India, where it is made, until it is taken door-to-door in the remote villages of the Mogode health district. “It’s not easy to get the vaccine to the people who need it,” says Griggs. 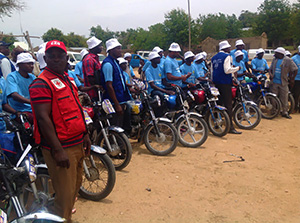 Community health workers use motorcycles to travel to different villages, where they will distribute the oral cholera vaccine door-to-door.

The goal of the campaign is to reduce the burden of cholera in Cameroon and prevent another epidemic of the severe diarrheal disease. Each person must get two doses of oral cholera vaccine, a regimen which offers 65%-75% protection for up to five years. More 127,000 people received the vaccine, which was given to everyone one year and older, except pregnant women. Griggs said the vaccine campaign – the largest oral cholera vaccination campaign ever in Cameroon – was successful, with overall coverage rates of 82.4% in the first round and 89.2% in the second round.

The project targets cholera “hotspots” with vaccine and, importantly, combines vaccination with reinforced messages about safe drinking water, hygiene, and sanitation. It also aims to improve surveillance and laboratory techniques in the country. “Vaccine is one of several valuable tools in cholera control, but it’s not a permanent solution on its own,” emphasizes Griggs.

Cholera bacteria are usually found in water or food that has been contaminated by feces [poop] from an infected person. The disease often occurs in places with inadequate access to safe drinking water and sanitation or facilities for handwashing and hygiene. Griggs notes that is the case in Mogodé, where she is working. 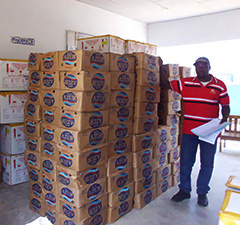 Boxes of soap are ready in a warehouse in Cameroon. One bar will be given to each person who receives the oral cholera vaccine, along with instructions on the importance of handwashing to prevent disease.

As they travel door-to-door to give vaccines, health workers teach handwashing techniques to people who get the vaccine and give a bar of soap to each household. Additionally, International Medical Corps is working to help fix damaged water sources, drill borehole wells to improve water access, and work with communities to reduce open defecation and increase use of latrines. This combination of oral cholera vaccine and improved water and sanitation in Cameroon’s high-risk regions will help protect people from infection and stop cholera from spreading.

Cholera prevention activities are part of the Global Health Security Agenda’s pilot project, the Emergency Management of Cholera, in Cameroon.

Partners in the Cameroon effort include epidemiologists and health workers from other CDC divisions (including the Center for Global Health’s Division of Global Health Protection and Global Immunization Division), the Cameroon Ministry of Health, the Global Task Force on Cholera Control, WHO-Cameroon, UNICEF, The Vaccine Alliance (Gavi), International Federation of the Red Cross and Red Crescent Societies, non-governmental organizations including International Medical Corps and M.A. Santé, researchers at the Johns Hopkins University Bloomberg School of Public Health, and four Field Epidemiology Training Program residents from Cameroon and Chad.