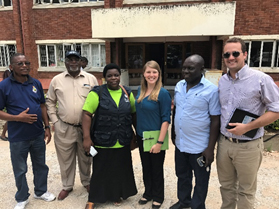 Members of the Global WASH outbreak investigation team and colleagues from the Ministry of Health and Child Welfare and WHO in Zimbabwe.

CDC assists foreign Ministries of Health in investigating international water, sanitation and hygiene (WASH)-related disease outbreaks. Investigations help identify how outbreaks start and how to control them so that more people do not get sick. The results of an investigation help us learn how to prevent similar outbreaks from happening in the future. 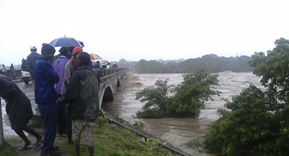 Since 2010, CDC has worked with the Zimbabwe Ministry of Health and Child Welfareexternal icon to investigate suspected outbreaks of typhoid fever; a life-threatening illness caused by a germ called Salmonella Typhi. In January 2017, teams from CDC-Atlanta, CDC-Zimbabwe, CDC-Kenya, and the Kenya Medical Research Instituteexternal icon assisted the Ministry with an investigation of a typhoid fever outbreak in Zimbabwe. The team helped improve laboratory testing to identify cases of illness, define the size and extent of the outbreak, and determine how to keep it from spreading.

Typhoid fever can spread if sewage contaminated with the germ gets into the water people use for drinking or washing food. The results of the Zimbabwe investigation showed that in highly populated areas of the city many old and damaged boreholes, which are wells drilled deep into the ground to access underground water, were contaminated with feces (poop). The region had experienced record rainfall and flooding, which caused sewer systems to overflow and contaminate the city’s water sources, making people sick.

By responding to this outbreak, CDC helped improve the national capacity to detect and respond to future typhoid cases before they can spread the disease and cause outbreaks.  Specific CDC actions included:

This outbreak and others demonstrate the impact that typhoid fever continues to have in sub-Saharan African countries and highlight the continued importance of typhoid fever prevention and control in Africa. 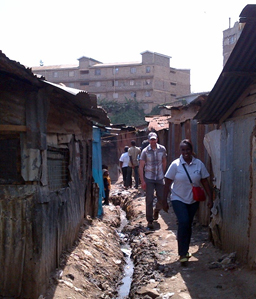 In recent years, CDC has assisted with an increasing number of large cholera outbreaks in east Africa. The ongoing presence of cholera in the region, extreme weather events, and urbanization have made cholera prevention and control challenging.

From late 2014 to late 2016, a cholera outbreak spread across Kenya. Between December 2014 and January 2016 alone it caused over 11,000 cases of illness and 178 deaths—the largest cholera outbreak in Kenya since 2010. A cholera outbreak affecting large portions of Tanzania began in August 2015 and had caused about 24,000 cases and 360 deaths, as of December 2016. CDC assisted the Ministries of Health of Kenya and Tanzania in investigating and responding to the outbreaks, with support from teams of epidemiologists and laboratorians from the Kenyan and Tanzanian Field Epidemiology Training Programs and the CDC-Kenya and CDC-Tanzania country offices. The teams were involved in critical parts of the investigation, including:

For more information about the cholera outbreak in Kenya, see Notes from the Field: Ongoing Cholera Outbreak — Kenya, 2014–2016.

For more information about the cholera outbreak in Tanzania, see Notes from the field: Ongoing Cholera Epidemic –Tanzania 2015–2016.