Strep Throat: All You Need to Know

Worried your sore throat may be strep throat? Doctors can do a quick test to see if a sore throat is strep throat. Antibiotics can help people with strep throat feel better faster and prevent spreading it to others.

Viruses cause most sore throats. However, strep throat is an infection in the throat and tonsils caused by bacteria called group A Streptococcus (group A strep).

How you get strep throat

It usually takes two to five days for someone exposed to group A strep bacteria to become ill with strep throat. 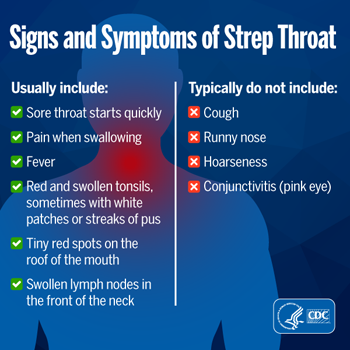 A sore throat that starts quickly, pain with swallowing, and fever are some of the common signs and symptoms of strep throat.

Pain, fever, but no cough is common

Other symptoms may include a headache, stomach pain, nausea, or vomiting — especially in children. Someone with strep throat may also have a rash; it is known as scarlet fever.

Some symptoms suggest a viral cause rather than group A strep

The following symptoms suggest a virus is the cause of the illness instead of strep throat:

Anyone can get strep throat, but there are some factors that can increase the risk of getting this common infection.

Adults who are at increased risk for strep throat include:

Close contact with another person with strep throat is the most common risk factor for illness. For example, if someone has strep throat, the bacteria often spread to other people in their household.

A doctor will determine what type of illness you have by asking about symptoms and doing a physical exam. If they think you might have strep throat, they will swab your throat to test for strep throat. There are two types of tests for strep throat: a rapid strep test and throat culture.

Doctors treat strep throat with antibiotics. Benefits of antibiotics include:

People with strep throat should stay home from work, school, or daycare until they:

Not everyone needs antibiotics

Someone who tests positive for strep throat but has no symptoms (called a “carrier”) usually does not need antibiotics. They are less likely to spread the bacteria to others and very unlikely to get complications.

If a carrier gets a sore throat illness caused by a virus, the rapid strep test can be positive. In these cases, it can be hard to know what is causing the sore throat.

Serious complications are not common

Complications can occur after a strep throat infection. This can happen if the bacteria spread to other parts of the body. 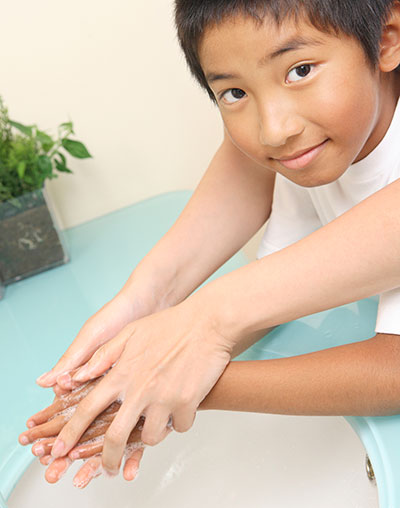 Wash your hands often to help prevent germs from spreading.

People can get strep throat more than once. Having strep throat does not protect someone from getting it again in the future. While there is no vaccine to prevent strep throat, there are things people can do to protect themselves and others.

The best way to keep from getting or spreading group A strep is to wash your hands often. This is especially important after coughing or sneezing and before preparing foods or eating.

Antibiotics help prevent someone with strep throat from spreading the bacteria to others.