Scarlet fever is an illness caused by pyrogenic exotoxin-producing S. pyogenes. S. pyogenes are gram-positive cocci that grow in chains (see figure 1). They exhibit β-hemolysis (complete hemolysis) when grown on blood agar plates. They belong to group A in the Lancefield classification system for β-hemolytic Streptococcus, and thus are called group A streptococci.

Scarlet fever, also called scarlatina, is characterized by a scarlatiniform rash and usually occurs with group A strep pharyngitis. It can also follow group A strep pyoderma or wound infections.

Characteristics of the rash typically include: 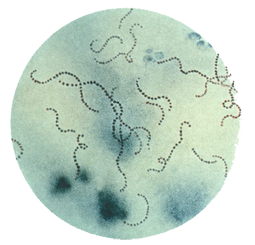 The rash usually persists for about one week and desquamation may follow. In addition, the face may appear flushed and the area around the mouth may appear pale (i.e., circumoral pallor). A yellowish white coating with red papillae may initially cover the tongue. The eventual disappearance of the coating can result in a “strawberry tongue.”

Group A strep infections, including scarlet fever, are most commonly spread through direct person-to-person transmission. Typically transmission occurs through saliva or nasal secretions from an infected person. People with scarlet fever are much more likely to transmit the bacteria to others than asymptomatic carriers. Crowded conditions — such as those in schools, military training facilities, or daycare centers — facilitate transmission. Although rare, spread of group A strep infections may also occur via food. Foodborne outbreaks of group A strep have occurred due to improper food handling. Environmental transmission via surfaces and fomites was historically not thought to occur. However, evidence from outbreak investigations indicate that environmental transmission of GAS may be possible, although it is likely a less common route of transmission.

Humans are the primary reservoir for group A strep. There is no evidence to indicate that pets can transmit the bacteria to humans.

Treatment with an appropriate antibiotic for 12 hours or longer generally eliminates a person’s ability to transmit group A strep. People with scarlet fever should stay home from work, school, or daycare until:

The incubation period of scarlet fever is approximately 2 through 5 days.

Scarlet fever can occur in people of all ages. It is most common among children 5 through 15 years of age. It is rare in children younger than 3 years of age.

The most common risk factor is close contact with another person with scarlet fever. Crowding, such as found in schools, military training facilities, and daycare centers, increases the risk of disease spread.

See the resources section for specific diagnosis guidelines for adult and pediatric patients1,2,3.

The use of a recommended antibiotic regimen to treat scarlet fever:

Penicillin or amoxicillin is the antibiotic of choice to treat scarlet fever. There has never been a report of a clinical isolate of group A strep that is resistant to penicillin. For patients with a penicillin allergy, recommended regimens include narrow-spectrum cephalosporins (e.g., cephalexin, cefadroxil), clindamycin, azithromycin, and clarithromycin.

See the resources section for specific treatment guidelines for adult and pediatric patients1,2,3.

Abbreviation: Max, maximum.
a Avoid in individuals with immediate type hypersensitivity to penicillin.
b Resistance of group A strep to these agents is well-known and varies geographically and temporally.

Note: If you are interested in reusing this table, first obtain permission from the journal; request by emailing journals.permissions@oup.com.

Good hand hygiene and respiratory etiquette can reduce the spread of all types of group A strep infection. Hand hygiene is especially important after coughing and sneezing and before preparing foods or eating. Good respiratory etiquette involves covering your cough or sneeze. Treating an infected person with an antibiotic for 12 hours or longer generally eliminates their ability to transmit the bacteria. Thus, people with scarlet fever should stay home from work, school, or daycare until: