Why CDC is Involved with Global Typhoid Fever

Health Costs: The Typhoid Fever Burden is Highest Among Children

Monetary Costs: The Economic Burden of Typhoid Fever is High for Patients 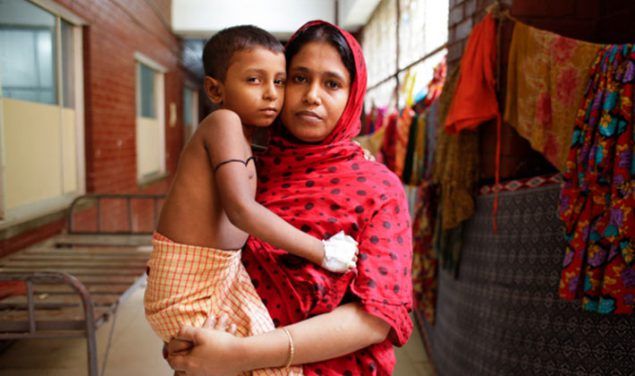 A young boy recovering from typhoid fever with his mother at a hospital in Bangladesh, 2016. Credit: Sabin Vaccine Institute/Das.

The Surveillance for Enteric Fever (typhoid fever and paratyphoid fever) in Asia Project was a multi-country, multi-site population-based surveillance study aimed at characterizing the burden of enteric fever in South Asia. The project showed how typhoid fever created economic hardships for patients, especially when compared to what they might normally spend on healthcare. The median cost of the illness (treatment associated costs and time lost from work or school) for study participants who were not hospitalized was about $39 in Nepalexternal icon, $45 in Bangladeshexternal icon, and $157 in Pakistanexternal icon, as much as or more than a person in those countries might spend on medical care over an entire year ($49 in Nepal, $37 in Bangladesh, and $43 in Pakistan).

Ongoing Challenges: The Need for Typhoid Fever Vaccines is Growing

Growing antibiotic resistance makes the need for vaccines even greater. Typhoid conjugate vaccines (TCV)external icon prevent typhoid fever, which could help decrease the use of antibiotics and may limit the emergence of new S. Typhi drug resistant strains. TCV also protect infants and children against typhoid fever for 5 years or longer.

In 2018, The World Health Organization (WHO) recommended external iconthat in countries where typhoid fever is endemic (local transmission) or causes recurrent outbreaks, TCV be included in childhood vaccination programs and administered at 9 months of age or up to 2 years of age. Catch-up campaigns for children up to 15 years of age are also recommended at the time of TCV introduction in those countries. By the end of 2021, TCV had been introduced into the childhood vaccination program in four countries: Liberia, Pakistan, Samoa, and Zimbabwe.