Typhoid Fever is a Serious Illness That Can Be Prevented 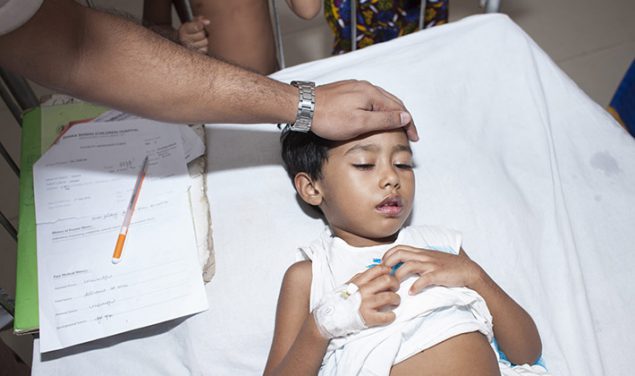 A child with typhoid fever at a hospital in Bangladesh, 2016. Credit: Sabin Vaccine Institute/Das.

Typhoid fever is a serious illness caused by the Salmonella enterica serotype Typhi (S. Typhi) bacterium that spreads through contaminated water or food. Symptoms of typhoid fever infection include a sustained high fever, headache, weakness, stomach pain, diarrhea or constipation, cough, and loss of appetite. Without treatment, it can lead to severe complications such as gastrointestinal bleeding, septic shock, and death.

Typhoid fever can be treated with antibiotics. However, the overuse and misuse of antibiotics has led to widespread occurrence of antibiotic resistant strains of S. Typhi. Extensively drug resistant (XDR) strains are beginning to appear, such as the ongoing XDR S. Typhi epidemic in Pakistan since 2016. It can be harder to treat people with typhoid fever caused by a multi-drug resistant or XDR strain of the bacterium because there are fewer antibiotic options that may be hard to access. 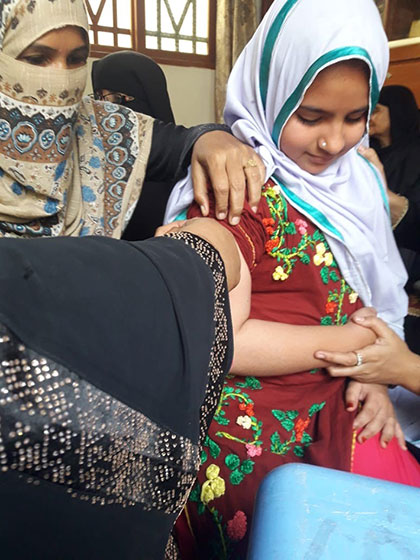 Typhoid fever can be prevented by vaccination, having access to safe water and adequate sanitation, health education, and appropriate hygiene among food handlers.

To accelerate control of typhoid fever in countries where burden or drug resistance is high, the WHO recommends:

Typhoid fever is a significant public health problem in many low- and middle-income countries, especially in areas with poor water supply and sanitation systems.

In 2017, over 10 million typhoid fever cases occurred globally, causing over 116,000 deathsexternal icon. Most cases occur in South Asia, Southeast Asia, and Sub-Saharan Africa. Typhoid fever is likely underreported because it can be mistaken for other illnesses that produce fever, many affected people might not seek healthcare, and it requires a blood culture to confirm.

Up to 5% of people with typhoid fever can become chronic carriers, meaning they are able to spread the disease to their community over long periods of time. Chronic carriers may not know they are spreading the bacteria.