World Polio Day (October 24) provides an opportunity to highlight global efforts toward a polio-free world and honor the tireless contributions of those on the frontlines in the fight to eradicate polio from every corner of the globe. Through the Global Polio Eradication Initiative (GPEI), CDC works with partners to eradicate polio and end the suffering from this devastating disease.

In 1988 the World Health Assembly worldwide adopted a declaration to eradicate polio. Since then:

An investment in polio is also an investment in pandemic preparedness response. The tools, infrastructure, and knowledge developed to eradicate polio have saved countless lives across the globe and often serve as the default epidemic response program in dozens of countries during health emergencies. Health workers and systems that deliver polio vaccines also help

Persistent challenges remain to end all forms of polio.

In June of 2021, the GPEI launched the Polio Eradication Strategy 2022 – 2026 outlining a coordinated approach to:

We believe that as part of the Global Polio Eradication Initiative and with other countries and organizations worldwide, together we can end all forms of polio! 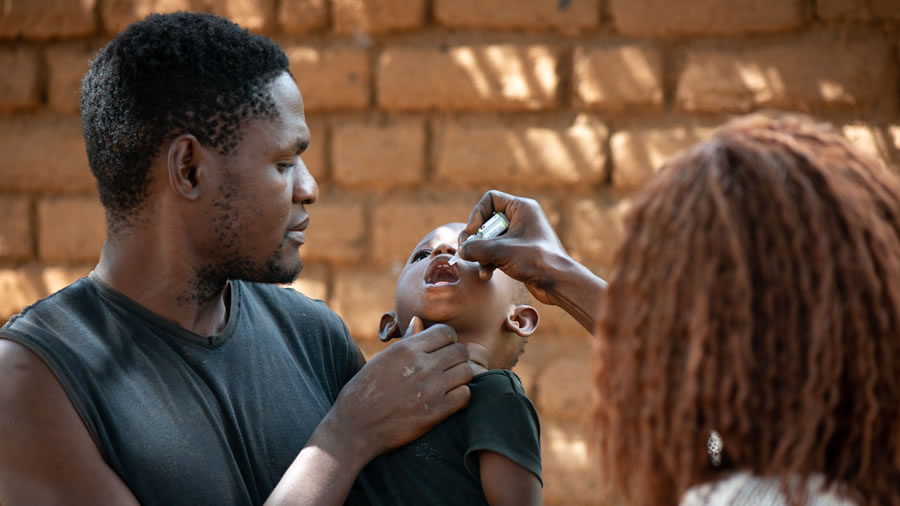 Godfrey Phiri comforts his daughter, Trisha, as she receives the Oral Polio Vaccine outside their home in Nkaleya village near Zomba, Malawi.

Polio On The Web

Polio, or poliomyelitis, is a crippling and potentially deadly infectious disease caused by the poliovirus that invades the brain and spinal cord, causing paralysis. The virus spreads from person-to-person and only affects humans; children are especially susceptible. Because polio has no cure, vaccination is the only way to protect children and stop the disease from spreading.