CHALLENGE: Standard Ebola testing took 24 hours to give results and was available in a few facilities in Guinea, meaning patients had to travel far and wait days for results. The length of time it took to identify those infected with Ebola, delayed treatment and allowed the virus to spread.

SOLUTION: CDC and the Guinea Ministry of Health saved lives by implementing the innovative Ebola rapid diagnostic test. Testing is now possible at regular local health facilities, and the results take just 30 minutes. Isolating and treating Ebola patients, as well as contact tracing for others who may also be infected, helped break the chains of transmission.

The number of survivors from the 2014 Ebola outbreak was much greater than in previous outbreaks. Healthcare professionals know that even after blood tests confirm that a patient is no longer sick with Ebola, the virus can still live in semen and other bodily fluids. What they didn’t know is how long the virus could remain in semen – more than 18 months in some cases.

As a result, there is a need to advise survivors on ways to protect themselves and their communities.

In Liberia, CDC, Academic Consortium to Combat Ebola in Liberia (ACCEL) and the World Health Organization partnered with the Liberian Ministry of Health to launch the Men’s Health Screening Program (MSHP) The goal of the program is to reduce sexual transmission of Ebola by providing survivors with comprehensive counseling and testing. The program informs male survivors about their risk of spreading Ebola through sex and empowers them to protect their sexual partners. In addition, the Men’s Health Screening Program provides emotional support and encourages survivors to continue participation until their semen no longer tests positive for the virus. 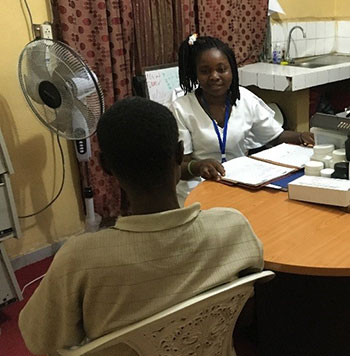 A counseling session at Redemption Hospital.

Running the Men’s Health Screening Program has not been easy. Many survivors were hesitant to join because of the stigma associated with being an Ebola survivor—they did not want their neighbors to know. Eager to return to their normal lives, survivors often ignored the program’s phone calls and attempts to enroll them. But Armah, a MSHP staff member, says it helps that more than half of the staff are Ebola survivors; it’s survivors encouraging other survivors.

Charlesetta, a MHSP counselor, travels to the homes of program participants to collect samples for testing and to check on their mental and emotional state. She is no stranger to fear, anger, and despair and often wonders, “What am I going to say this time around to calm them down?” Participants often get discouraged when test results show they are still positive for Ebola, feeling they will never be free from the disease. She knows what survivors want and need most—to return to a normal life, without the threat of Ebola hanging over their heads. Charlesetta’s words provide strength: “You will not be positive forever…Don’t give up.”

By May 2016, the Men’s Health Screening Program had provided counseling to more than 450 men and had given out more than 11,500 free condoms. Of the more than 450 men whose semen has been tested, nearly 350 have graduated from the program after receiving two consecutive negative test.

Identifying Ebola survivors continues to be a challenge, but the program staff’s commitment inspires, motivates, and drives the participants forward. Armah promised himself he would do everything in his power to prevent another Ebola outbreak. He tells himself, “I will be successful. I will be valuable. I will make an impact.”

Armah promised himself he would do everything in his power to prevent another Ebola outbreak. He tells himself, “I will be successful. I will be valuable. I will make an impact.”

CDC’s continued support of projects like the Men’s Health Screening Program helps reduce the risk of future outbreaks, increasing the health security not just of Liberians but of Americans and other populations around the world.