At the height of the Ebola epidemic, Guinea began working toward creating an emergency operations center (EOC) to improve their ability to respond to emergencies quickly and to scale. EOCs are critical to coordinating rapid and lifesaving efforts against outbreaks. In an emergency, having people who know what to do saves lives.

Guinea recognizes that the most important resource in any EOC is people. This is why, as they work toward establishing and maintaining an EOC, the country is also working with CDC and other partners to train a team of experts who understand how to effectively and efficiently manage an emergency response. 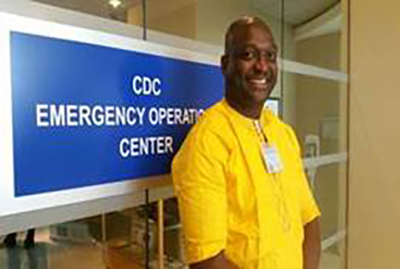 Dr. Amadou Traore is one of seven staff hired to work full-time on building the country’s EOC. To help him in his role as the EOC’s Chief of Operations, Dr. Traore traveled to Atlanta in January 2017 to attend CDC’s 4-month Public Health Emergency Management Fellowship. The fellowship provides participants from all over the world with an in-depth understanding of emergency systems and how they function.

Dr. Traore has already begun using knowledge gained from the fellowship to develop critical plans that will improve reporting, risk communications, and operations in the EOC. “It for sure will not be business as usual when I get back to my work in Guinea,” he says of his experience.

Because French is Guinea’s official language, six Guinea EOC staff traveled to Canada to receive emergency management training in French in March and May of 2017. CDC partnered with the International Organization for Migration and Public Health Agency Canada to offer the month-long trainings.

CDC had previously partnered with Public Health Agency Canada during the 2014–2016 Ebola response to provide French-speaking emergency responders to Guinea, and was able to leverage that existing relationship to coordinate the trainings, which covered the principles of emergency management; the Incident Management System; and roles and responsibilities before, during, and after an emergency activation.

Since the Guinea EOC team’s creation in July 2016, the team has already been tested through three activations, all of which resulted in response times of 48 hours or less. Two activations were for investigations of yellow fever alerts, which were determined to be low risk. Now on their third activation, the Guinea EOC is currently coordinating the response to a measles outbreak first declared in February 2017.