CDC-trained disease detectives like Vitor Inhane learn to quickly put the pieces together to figure out what’s making people sick in a community and prevent more people from becoming ill. While conducting a malaria study in Guinea-Bissau, Inhane did just that, helping to identify the country’s first four cases of Zika virus infection.

A graduate of Guinea-Bissau’s Frontline Field Epidemiology Training Program (FETP-Frontline), Inhane was studying severe cases of malaria in the Bijagos region, where he is responsible for surveillance. Knowing that the symptoms of malaria are often the same as other mosquito-borne diseases like dengue, chikungunya, and Zika, he proposed additional testing to check patients for these diseases. The testing uncovered four sick patients infected with Zika virus.

Gearing up to fight Zika 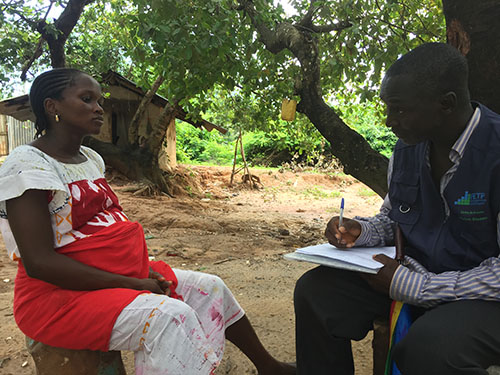 Laboratory testing is often the only way to distinguish one illness from another, especially when they have similar symptoms and are found in the same areas. Until a few years ago, Guinea-Bissau had limited experience with laboratory diagnostics. Samples from Inhane’s group had to be sent to the Institut Pasteur in Dakar, Senegal, for confirmation. With Zika now on Guinea-Bissau’s radar, the government has been working to improve its own laboratory capacity.

National surveillance for Zika is planned once the country’s laboratories are able to effectively tackle the work. Following this investigation, further tests showed that the Zika virus sequence identified in this outbreak had no relation to the outbreak in the Americas, but showed a close relationship with strains known to circulate in other parts of Africa.

The presence of the Aedes species mosquitoes that carry Zika has been confirmed in some regions of the country, and several small entomologic studies have begun. An emergency operations center has already been established in Guinea-Bissau, and a contingency plan for a national response to Zika has been developed.

A strong workforce makes a difference

The rapid international spread of the Zika virus demonstrates the need for global vigilance and the importance of quickly identifying the virus wherever it occurs. Since March 2016, CDC has been collaborating with Guinea-Bissau’s National Institute of Public Health to support its ability to quickly identify and track infectious diseases like Zika.

As this example shows, a robust public health workforce of highly trained disease detectives is key to rapidly identifying, tracking, and stopping the spread of diseases. To increase the number of surveillance officers in the country, Guinea-Bissau’s FETP-Frontline program was launched in March 2016. To date, 70 staff have been trained and have investigated outbreaks of diseases such as cutaneous anthrax, meningitis, rabies, and measles, among others. Inhane graduated with the first cohort of FETP-Frontline, in May 2016.