A WASH Engineer Follows Cholera from the Source 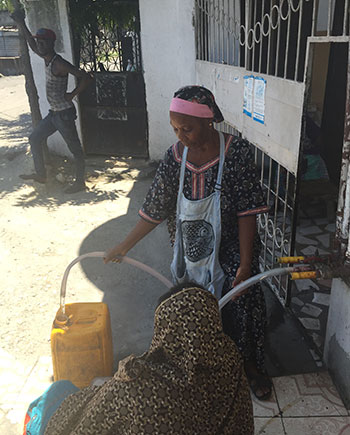 In 1854, John Snow helped usher in the field of epidemiology by tracing an outbreak of cholera to a local water pump, proving that the best way to solve a problem is to go directly to the source. When I went to Tanzania to investigate the same disease in 2016, contaminated water was still an issue. But I didn’t find just a pump. Instead, I found a whole truckload of sources.

By this point, cholera had been reported in 19 regions of Tanzania. Without treatment, the disease can become deadly within hours. The best way to stop cholera from spreading is to make sure people have safe water to drink. As a water, sanitation, and hygiene (WASH) engineer, I knew that killing harmful germs in water is often done by adding chlorine. But once I arrived, I realized it was not going to be that simple.

First, in urban Dar es Salaam, only about 10% of people receive their water from the piped network. Most residents rely either on water trucks that deliver water directly to households, or on private water vendors who sell water to community members from large tanks. Water vendors get their water from many different sources. We wanted to target the water being sold in cholera-affected areas in Dar es Salaam, but ensuring that all water sources were adequately chlorinated was going to be difficult.

Second, while chlorine tablets are effective, there’s a catch: chlorine breaks down over time. In Dar es Salaam, water from tanker trucks can be delivered from miles away and then stored in a vendor tank for days before it is sold. Therefore, even if we added chlorine to the tank on a truck, by the time households actually received the water, chlorine levels may have been too low for it to be considered safe.

With these challenges in mind, we decided the most reliable solution was to chlorinate the water inside the large vendor tanks in our target areas. Along with our partners, we started a small project where 28 vendors from one cholera-affected ward agreed to treat the water in their tanks with chlorine tablets we provided. The vendors were enthusiastic, since using the tablets meant they were able to ensure they were selling safe water to their community members.

We visited these vendors multiple times to test their water and our results were encouraging. Most tanks had detectable levels of chlorine, and the vendors were eager to get more tablets. The project has expanded to 15 wards and more than 700 vendors. We are monitoring the results closely. This project gives us hope that cholera can be stopped, as long as we ensure water is treated – no matter the source.