Strain of Candida auris cultured in a petri dish at the Centers for Disease Control and Prevention (CDC).
Photo: Shawn Lockhart

Candida auris (C. auris) is an emerging fungus that presents three serious concerns as a growing public health threat in the United States and around the globe. The fungus is not only difficult to identify with standard laboratory methods, but also challenging to treat because it is resistant to multiple antifungal medicines commonly used to treat Candida infections.

Additionally, C. auris spreads rapidly in hospitals and nursing homes, making it important to quickly identify the fungus in patients and take immediate special precautions to stop its proliferation.

Countries where Candida auris Cases Have Been Reported (As of February 28, 2019) 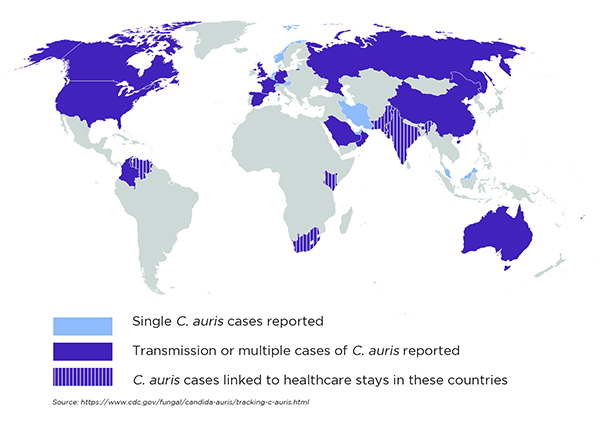 Between July and September 2016, a mystery bloodstream infection began to spread and posed a grave threat to seriously ill patients in the intensive care unit at one of the largest hospitals in Panama. The invasive infection spread to nine patients, posing a health security concern to the hospital and requiring immediate public health interventions.

Initial laboratory testing in Panama identified the disease-causing agent as Candida haemulonii, another kind of Candida species. The Panamanian Ministry of Health requested assistance to respond to the outbreak from CDC’s Central America Regional Office.

Using specialized laboratory techniques that were not available in most Central American countries at the time of the outbreak, CDC confirmed, for the first time, the presence of C. auris in Panama. Around the same time, C. auris cases were identified in South America, including in neighboring Colombia. CDC also reported that most of the C. auris samples were resistant to at least one of three most commonly used antifungal treatments. Panama’s public health and clinical authorities, with CDC technical assistance, implemented infection control practices to contain the outbreak. The number of infections caused by C. auris at the hospital decreased in the following months. 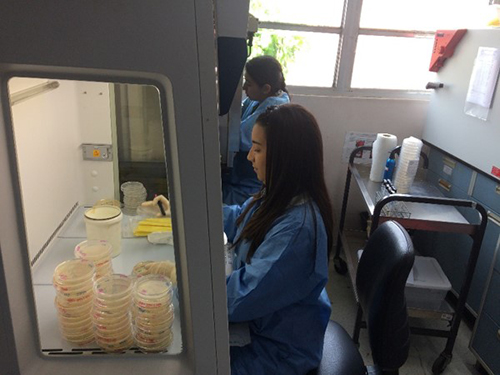 Given the complexities of identifying and treating dangerous pathogens like C. auris, CDC has coordinated efforts with ministries of health, the Council of Ministries of Health of Central America and Dominican Republic, and the Pan American Health Organization to implement regional programmatic activities to strengthen Central America’s capabilities to prevent, detect, and respond to outbreaks and emerging pathogens. In a world where rates of antifungal resistance are increasing, improving surveillance and response at the national level to prevent the spread of such drug-resistant pathogens from crossing borders is vital. CDC is steadfast in its mission to provide technical support so Panama and other countries stand better prepared to respond effectively to future outbreaks at home and in the region.

C. auris infections in the United States have been closely related to strains found in Central America. Assisting international partners is key to reducing the spread of C. auris in hospitals and long-term care facilities both at home and abroad.