The 2014-2016 West Africa Ebola epidemic tested the limits of the international community’s ability to respond to public health threats.

Before the epidemic, CDC lacked a formal and sustainable pool of trained responders who could immediately deploy in the event of an emergency and remain in the field for extended periods of time. Previously, CDC’s response system depended upon short-term deployments and lacked engagement of communities, partner organizations, and country governments. The epidemic emphasized an imminent need for coordinated responses, effective partnerships, and dedicated, skilled staff in emergencies. The question was not if CDC would see another emergency or outbreak of this scale, but when. 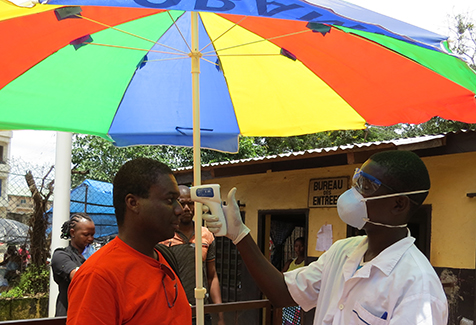 CDC EIS Officer LCDR Kerton Victory is screened for fever symptoms by a healthcare worker before entering a building in Guinea during the West Africa Ebola epidemic.

A Rapid Response Team Is Born

In 2015, CDC launched the Global Rapid Response Team (GRRT) to address challenges recognized during the Ebola response. GRRT provided technical assistance and strengthened preparedness efforts to assist countries in responding to public health threats. As a result, the new team of multidisciplinary experts responded more quickly and efficiently to emergencies, wherever and whenever.

Dante Bugli, an emergency public health epidemiologist, reflected on his role as a part of GRRT for the past three years. “CDC has a reputation as a research institution, and I’ve found that a lot of CDC staff chose public health because of an inherent humanitarian calling. I feel lucky to be a part of a team that deploys and assists communities in need of an extra helping hand.”

CDC created GRRT to provide the agency with a sustainable solution to emergency response—a team of over 500 specially trained surge responders. Responders are subject matter experts in fields such as surveillance, reproductive health, infection prevention and control, nutrition, and emergency management, with widely varying language and leadership skills. The team is made up of core staff who work full-time with GRRT and surge staff who are on call twice a year for emergency mobilizations. In the event of a large response effort, many GRRT core and surge members deploy multiple times a year.

Shortly after GRRT’s inception, the international community called upon the team to respond to an emerging threat: Zika virus. In May 2015, Brazil first reported an outbreak of Zika virus and its potential to cause severe birth defects during pregnancy. By 2016, the virus had spread to 14 countries in Latin America and the Caribbean. Within 24 hours of the country-initiated request for assistance, GRRT was on the scene, working around the clock to understand, track, and prevent further spread of Zika. By the end of the outbreak, GRRT sent 117 responders to nine countries and territories for a total of 151 deployments. The Zika virus response solidified GRRT as a key CDC asset and showcased its ability to quickly help countries stop an outbreak and avoid widespread negative health outcomes.

CDC’s Peter Thomas and a member of the Programme National pour l’Hygiene des Frontieres (PNHF) work to raise the sides of a screening tent in Kisangani City, DRC during a supervisory visit. Photo: Dante Bugli

As GRRT moves toward its fifth round of recruitment, GRRT staff have been actively engaged in responding to outbreaks, natural disasters, and sustainable health security strengthening efforts around the world. From polio in Mozambique and yellow fever in Angola, to coordinating the Hurricane Matthew response in Haiti and Ebola preparedness trainings in Uganda, GRRT proves that a capable, sustainable emergency workforce is an essential part of maintaining global health security. GRRT even deployed some members domestically to support West Virginia and Kentucky during the Hepatitis A outbreak response in 2018-2019.

August 2018 marked a new challenge for GRRT—another Ebola outbreak, this time in a conflict-affected area of the Democratic Republic of the Congo (DRC). Always learning, GRRT found that it needed a larger pool of French-speaking deployers for emergency responses in Francophone Africa.

Although the ongoing Ebola response has its challenges, GRRT’s impact is evident. GRRT experts have filled essential vaccine, infection prevention, laboratory, epidemiology, and risk communications positions. Preparedness and border health security efforts have, so far, prevented the spread of the virus in large numbers to surrounding countries such as South Sudan, Rwanda, and Uganda.

In DRC, GRRT has applied lessons learned from the 2014-2016 Ebola epidemic to prevent previous mistakes. Even with a small number of staff, GRRT has transformed limited resources into maximum impact. GRRT sustains global health security investments by providing a workforce ready to deploy anytime, anywhere. Rapid action saves lives, and GRRT is ready when emergencies strike.