Experts Team Up to Tackle Deadly Anthrax Across Uganda

In May 2017, two children in Uganda’s northern Arua District fell ill after eating the meat of an animal that was found dead.

Weeks later, in the same district, a 35-year-old man at the Rhino Camp refugee settlement became sick and died. Health workers noticed a large lesion on the man’s skin—a sign of anthrax. Word of more cases soon reached public health officials. In August 2017, dozens of people became sick in the southwestern Isingiro District after eating infected meat. Then, in the spring of 2018, news of anthrax outbreaks arrived from both Kirihura in the west and Kween in the east; additional case reports continued to come in from Arua. With outbreaks occurring in multiple regions across the country, public health experts needed to escalate the response. 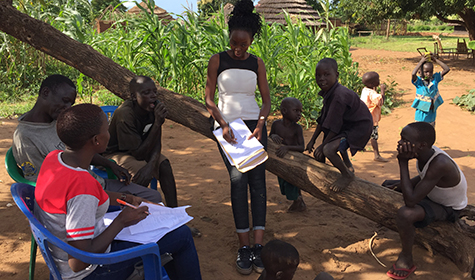 All of the outbreak reports were from places where people commonly keep cattle, which creates an increased risk that anthrax will spread to people. Anthrax is among Uganda’s seven priority zoonotic diseases, and stopping its transmission requires an all-hands-on-deck One Health approach that brings together experts in animal and human health.

Teams from CDC Uganda, CDC Atlanta, Uganda’s Ministry of Health (MOH), and the Ministry of Agriculture, Animal Industry, and Fisheries (MAAIF) joined together to address the growing challenge. The combined effort marked the first full-fledged collaboration between the animal and human public health sectors to tackle outbreaks of a priority zoonotic disease in Uganda.

With Uganda’s history of high-profile disease outbreaks, CDC has been supporting Uganda’s government in strengthening its ability to respond to infectious disease threats. These global health security activities have resulted in better communication and information systems; more capable surveillance and laboratory networks; a workforce of trained disease detectives; and a functioning Public Health Emergency Operations Center (PHEOC), helping the country rapidly respond to outbreaks and other emergencies. 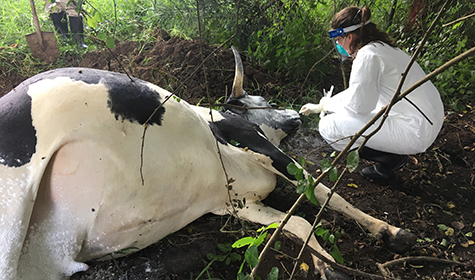 Laboratory tests at the CDC-supported Uganda Virus Research Institute (UVRI) were able to quickly confirm the cause of the outbreak as anthrax. Uganda’s disease detectives, trained through the CDC-supported Advanced Field Epidemiology Training Program (FETP), swung into action to investigate the initial outbreak clusters in Arua and search for additional cases in the district. Their investigation found that the vast majority of the cases were associated with eating, processing, or handling meat from animals that had died suddenly.

COORDINATED RESPONSE TO SAVE LIVES

As the crisis spread, Uganda drew upon its improved capabilities to scale up the response. The Uganda National Task Force for public health emergencies set up a Rapid Response Team (RRT) under a One Health platform. The response team set out to establish the scope of the outbreak, determine how people were being exposed, and use evidence to recommend control measures.

Members of the RRT came from both animal and human health sectors, including the MOH, MAAIF, the Uganda Wildlife Authority, FETP, UVRI, Makerere University College of Veterinary Medicine, the Infectious Disease Institute, the Food and Agriculture Organization, and a field response team from CDC’s Bacterial Special Pathogens Branch in Atlanta.

The RRT was dispatched to the Kween, Kiruhura, and Arua districts to search for human cases and exposures. They worked to educate the community and its healthcare workers about how to prevent and identify cases of anthrax. They also provided recommendations on antibiotic treatment, post-exposure prophylaxis (PEP) of human cases and exposures, and outbreak control measures such as vaccinating livestock and properly disposing of dead animals. 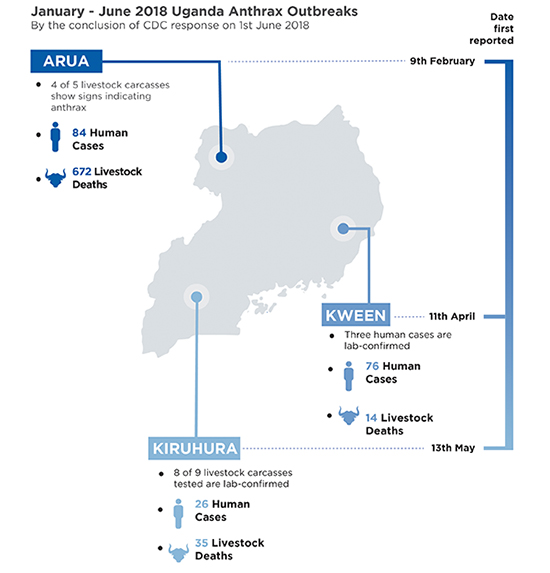 All identified human cases have been associated with direct contact with dead animals through slaughtering, skinning, handling, or through consumption of meat and products from suspected anthrax-infected livestock. In Kiruhura District alone, teams identified 1,050 people exposed to anthrax-infected livestock carcasses. All were given preventative courses of antibiotics.

AN ONGOING THREAT TO UGANDA

As of June 2018, the RRT had identified 715 cattle deaths due to suspected anthrax in the three affected districts. In total, 186 probable human cases of anthrax were identified across Uganda between January and June 2018.

Recent global health security efforts have made Uganda better prepared to handle outbreaks like this one, as well as to prevent, detect, and respond to future emergencies. While progress is being made, Zhu stresses the importance of remaining vigilant. “If we continue looking, chances are that we will find more cases and outbreaks.”