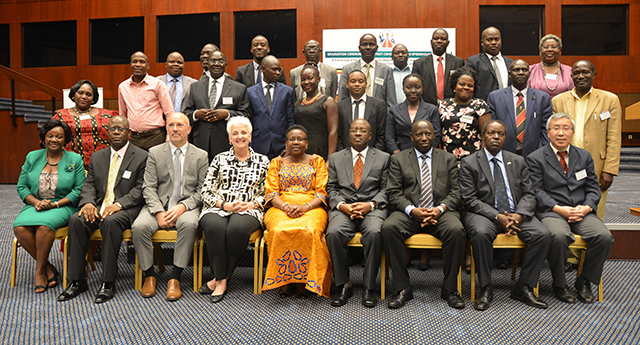 Benon Kwesiga, MD, a fellow with the Field Epidemiology Training Program (FETP) in Uganda, was a few months into the program when he heard an alarming radio report. Three students had died within hours after eating chapatis—Ugandan pizzas—and additional patients were admitted to the hospital.

New in the epidemiology class, Kwesiga was assigned to investigate the cases to ascertain the exact cause of illness and death, and to guide control and prevention measures.

“I embarked on community interviews with survivors, health workers, school administrators and policemen and quickly discovered that the victims had all eaten chapatis from the same food-stand which pointed to possible food poisoning,” he says. “I followed up with clinical, laboratory and autopsy investigations and collected samples for testing. I then looked at the autopsy results with police. Further investigations revealed that the chapatis were contaminated with organophosphates (OP),” he reveals.

Apparently, individuals commonly bring their own flour to the vendor to make the chapati. In this particular case, one person brought flour laced with OPs to make chapatis for a specific family with which he had domestic conflicts and the vendor unknowingly mixed up the chapatis with the contaminated flour. The “poisoned” chapatis were consumed by other customers.

Media reports of “strange diseases” in communities are all too common. But this is what CDC’s FETP is all about—hands-on training to investigate health problems in real time and prevent further spread of diseases.

Kwesigwa’s prompt intervention prevented many from falling ill because the chapati vending point was shut down immediately, remaining chapatis were destroyed, and survivors were referred to a more superior facility for proper care. Kwesigwa retrained health workers at the primary receiving facility on early diagnosis and referral. Recently, more stringent control measures on pesticide access and storage have been instituted in the affected district. 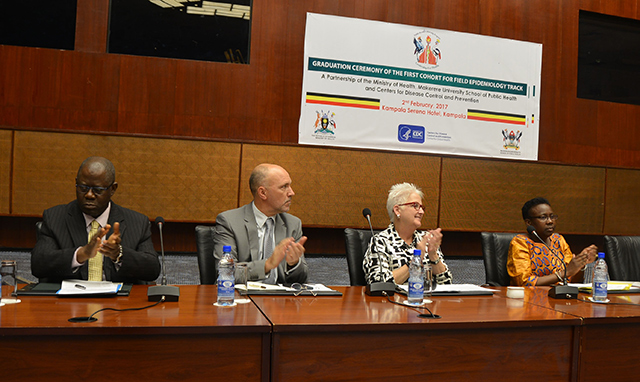 These were just part of the nearly 50 outbreaks and other epidemiologic studies that Uganda’s first-cohort (2015) of FETP fellows conducted to address major public health problems in Uganda. During their graduation on Thursday February 2, 2017, the 10 fellows presented robust study findings and made sound policy recommendations on waterborne outbreaks like typhoid and cholera. Presentations included control and prevention of food poisoning, tobacco use and associated factors, animal bite injuries and rabies deaths. Other studies included malaria control strategies using indoor residual spraying, antibacterial resistance patterns, as well as comparative studies on the cost of real time interventions to a cholera outbreak versus hypothetical interventions.

“They say experience is the best teacher. The knowledge I have acquired from this program is invaluable. Almost all the cases we handled were not only unexpected, but very important and demanded immediate and creative approaches to get to the root causes and engage communities. It’s great to learn by doing,” says Ben Masiira, one of the fellows who was attached to the MoH Epidemiology and Surveillance Division.

Bao-Ping Zhu, MD, CDC-Uganda FETP resident advisor, says every outbreak investigation is a great learning experience for the fellows. “We have always emphasized that we do not stay in class hoping to learn public health epidemiology. We do it in the community by responding to critical emerging PH epidemiology problems in real time,” Zhu says, adding, “And all their investigations have demonstrated that one ounce of prevention is equivalent to a kilo of treatment as it saves costs, prevents future outbreaks, and improves lives.” 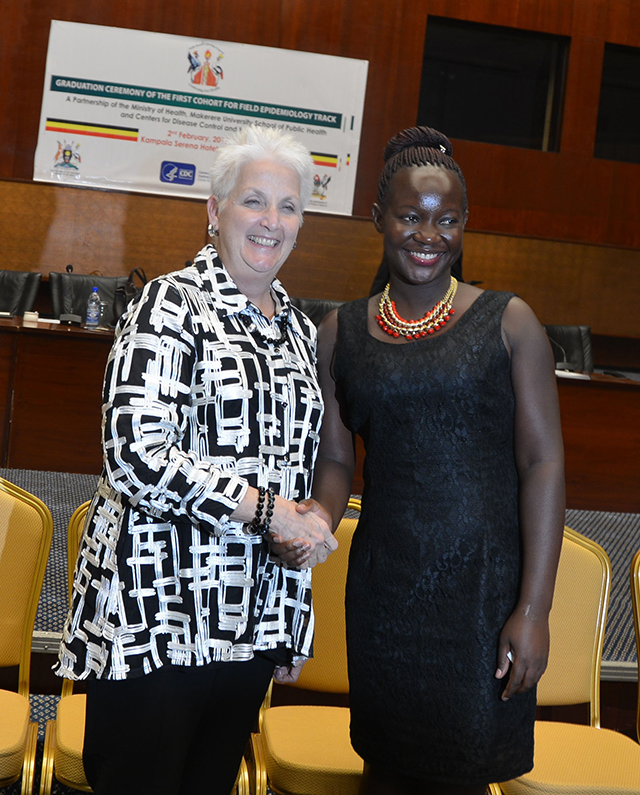 Malac with a graduating fellow. 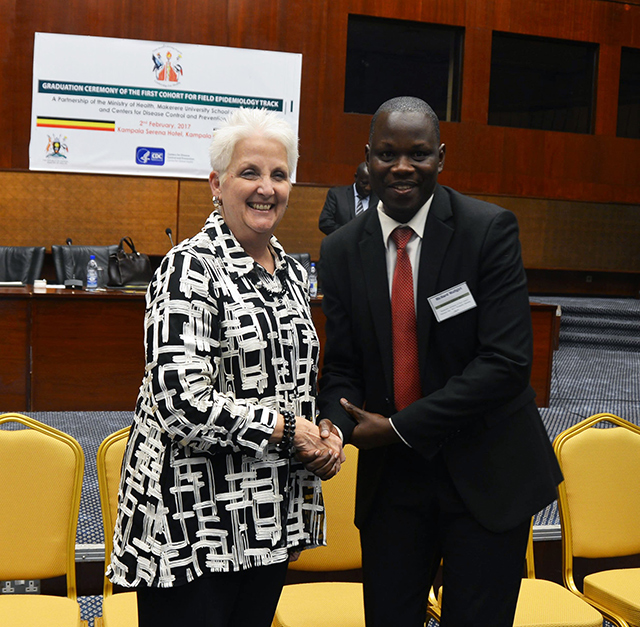 Malac poses for a photo with one of the graduating fellows.

Zhu is currently supervising the 2016 cohort and the new group (2017) of 11 PHFP fellows have just been recruited. The fellows will have a six-week introductory course before being placed in host sites in March 2017. The two-year post masters’ training-in-service program funded by CDC in partnership with the Makerere University School of Public Health and the Ministry of Health aims to equip public health professionals with much needed skills in investigation, prevention and control of public health challenges. The training program is modeled after the CDC’s Epidemic Intelligence Service (EIS) program which trains US disease detectives. 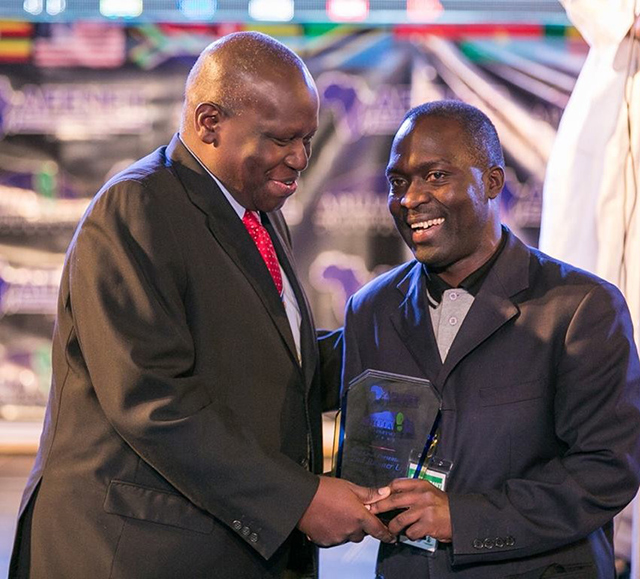 Fred Nsubuga, MD, one of the fellows receiving an award for 2nd runner up.

Christine Kihembo, MD, one of the fellows received a 2016 Jeffrey P. Koplan award. 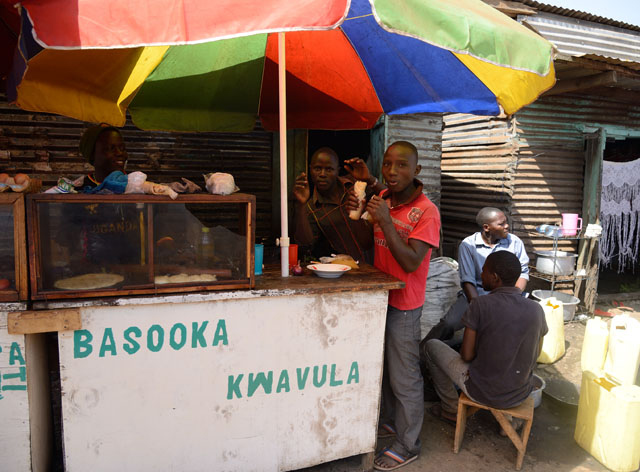 Under the program, fellows are taken through introductory field epidemiology and core public health modules before being placed in host institutions for hands-on training, spending over 75 percent of their time in the field with only intermittent classroom sessions. During their two-year placements, the fellows investigated outbreaks on typhoid, measles, Rift Valley Fever, Yellow Fever and other Viral Hemorrhagic Fever (VHF) outbreaks. They also investigated acute food poisoning, acute pesticide poisoning and acute herbicide poisoning incidents, suspected polio and conducted refugee health needs assessments during the recent South Sudanese refugee influx.

Officiating at the event, Ambassador Deborah Malac noted that disease surveillance and detection in public health is more critical than ever, with emerging and re-emerging diseases such as the bird flu. Yet many countries like Uganda still grapple with health service staffing shortages, especially in the field of epidemiology. 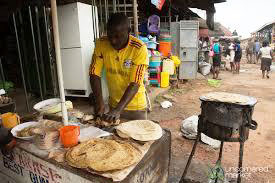 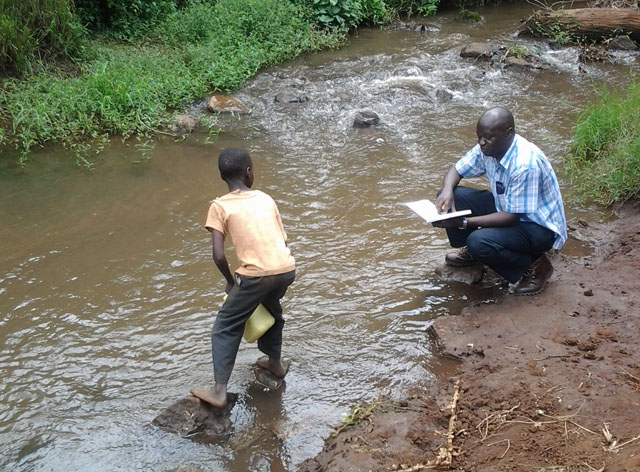 A fellow in the field. 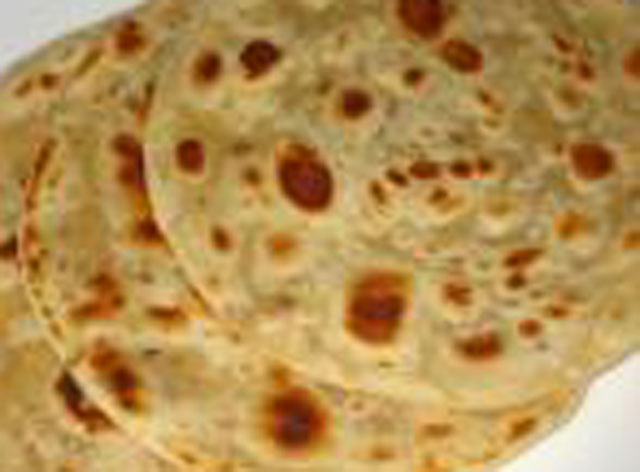 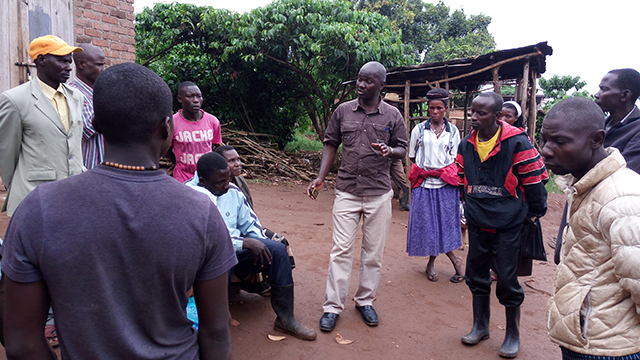 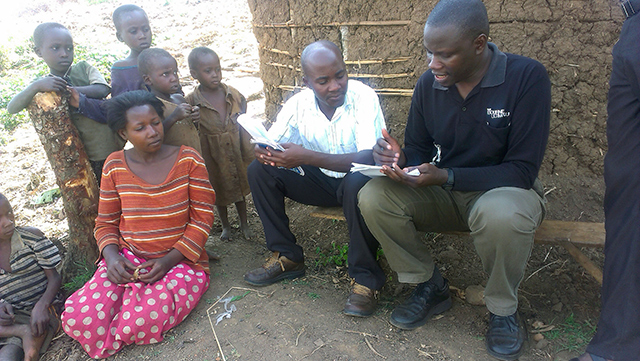 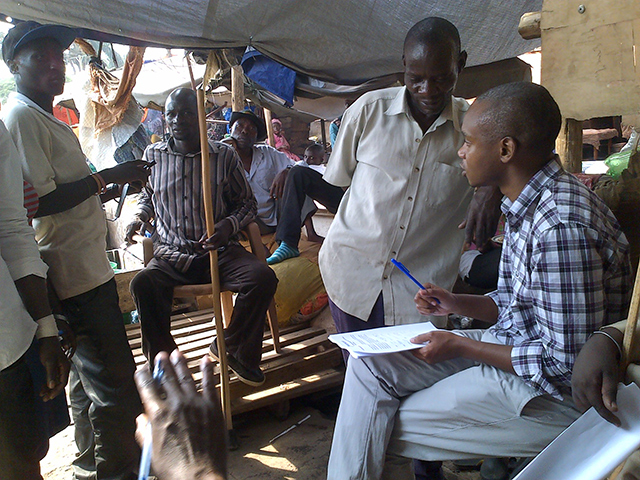 “Rumor or not, we investigate it,” says Alex Ario Riolexus, MD, the FETP field coordinator. “This program is an answered call to build robust and sustainable system for forecasting early detection and response to epidemics, emergencies and other priority diseases so as to improve disease prevention and public health response at all levels” End. 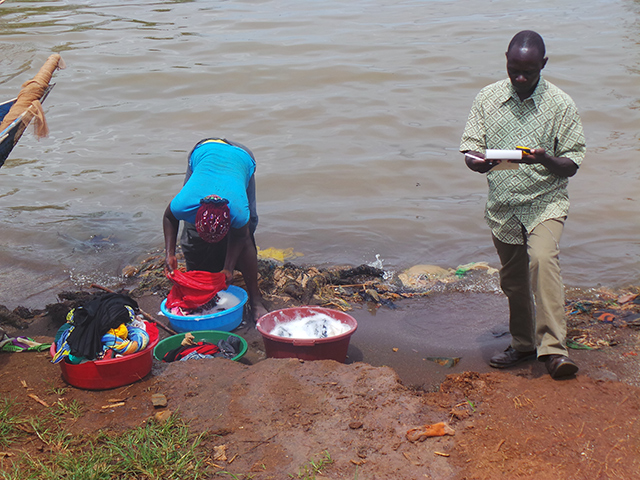 A fellow interacts with a woman at a water collection point. 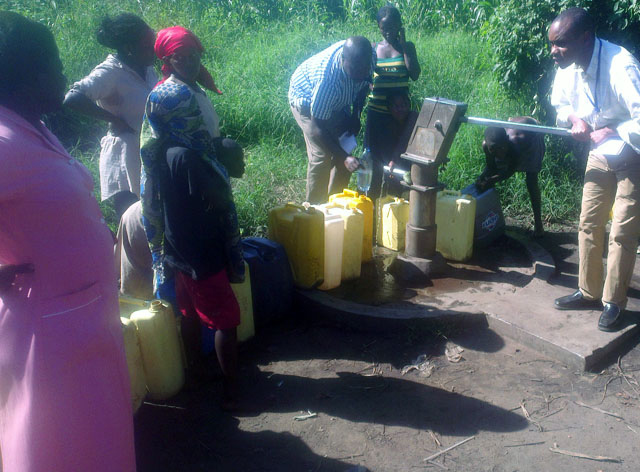