The Rise Young Women’s Clubs initiative is supported through the President’s Emergency Plan for AIDS Relief (PEPFAR) funding by the Centers for Disease Control and Prevention (CDC), South Africa, in 3 municipal districts in South Africa, namely Tshwane and Ekurhuleni in Gauteng, and Nkangala in Mpumalanga. 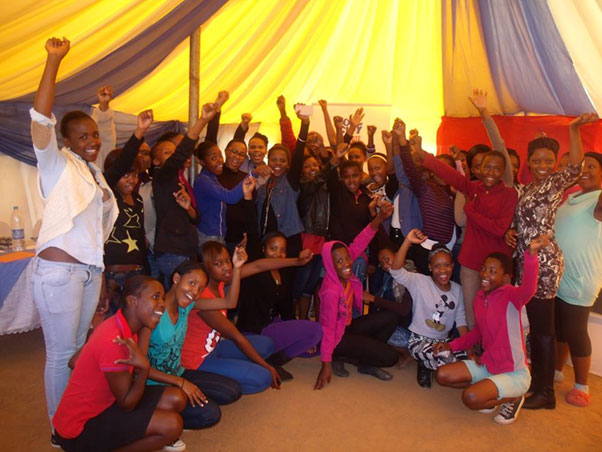 “It is well accepted in South Africa that the most vulnerable population for HIV infection is young women 15-24 years old and those living in informal settlements are even more at risk. South Africa despite having excellent policies still has a very gender unequal society with young women at the bottom of the pile and most impoverished. Thus the Rise Young women’s clubs were initiated,” says Dr. Sue Goldstein, Programme Director at Soul City: Institute for Health and Development Communication.

These clubs are in the poorest areas, as well as high incidence areas. The curriculum that is covered includes gender inequality, and practical ways of helping each other in developing sustainable livelihoods, in supporting each other in preventing transactional sex, teenage pregnancy, and new HIV infections. “The clubs are supported by an advisory panel of young women, a magazine which covers the curriculum in a fun, but structured way, and social media to connect the different groups to each other creating a movement,” says Dr. Goldstein.

Dr. Goldstein adds that the response to the clubs has been overwhelming, with requests for engagement and further involvement coming from numerous quarters. Unfortunately some of these have also been from districts that are not supported too, highlighting the growing need for initiatives such as this.

The current clubs have all had launches in which each club produced a drama depicting the challenges young girls face with transactional sex and intergenerational sex, as well as how the clubs will support young women. At the Rise launch in Hammanskraal, Tshwane (pictured here), a 15 year old pregnant member received a commitment from the clubs that they would support her on her journey.

In the Rise magazine alone, the complexities in the messaging relating to contraception, and the issues facing the young women in accessing and understanding their choices, is approached in a number of different ways.

The discussion around dual protection in the Rise magazine raises, amongst others, the question of why dual protection is necessary, and what the methods are one can choose from. A four-page spread on different contraception methods – what they are and how they work and the pros and cons of different methods – is included in the magazine, primarily:

Additionally the challenges faced by the young women are addressed in a fun engaging manner. The magazine also has a menstruation story about a mother who asked the clinic to give the Depo Provera (contraceptive) injection to her daughter, but told the daughter it was a vitamin. This opens the important discussion about honest communication, adolescence, and sexual reproductive health rights.

The suggested event highlighted related to contraception is a club visit to the local clinic in order to get to know the services and support each other in getting contraception. Another suggested event is the contraception party – in the vein of a Tupperware party – that brings all types of contraception to the clubs, and the girls can touch them and discuss how to use the condoms (male and female), and so forth.

A further opportunity for engagement is with the talk show funded by the Global Fund. This features club members engaging with a nurse and talking about their worries and successes with contraception.

We are all winners

The Enkambini Young Women’s Club in Nkangala, Mpumalanga, called themselves this as the word “enkambini” means “togetherness” or “we are one”. Their slogan is, “when one falls, we all fall; when one wins, we all win.” The club is composed of young women between the ages of 14 – 20 years of age. They are all at school. Relationships with their parents and guardians are difficult in some instances and club members say that they cannot address some issues with their parents. Others feel that their parents put them under pressure to have sexual relationships with older men so that they can get money to maintain their family. Although none of their siblings have attended tertiary institutions, they know of people in their community who have, and many say they want to study beyond Grade 12.

“It is these young women who are supporting each other and developing the skills to ensure they have a safe future. Though this is the beginning of the Rise clubs, detailed evaluations are planned to follow them up, gaining evidence for this intervention locally and adding to the international evidence that women’s clubs/support groups have an impact on morbidity and mortality,” concludes Dr. Goldstein. [1], [2]