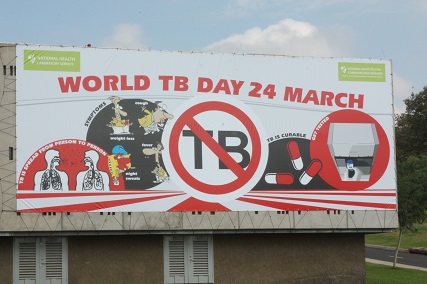 South Africa is burdened by one of the most severe tuberculosis (TB) epidemics in the world and there are an estimated half a million new cases of TB in South Africa every year. World TB Day, 24 March, is designed to build public awareness about the burden of TB worldwide, and the status of TB prevention and control efforts. This year CDC South Africa partners, NICD-NHLS, hosted an academic discussion on the local context, entitled “Getting to zero TB: Tackling HIV and TB drug resistance,” at their campus in Sandringham, Johannesburg.

Dr Francesca Conradie (Wits) discussed “HIV-TB: double trouble with double the opportunity – a clinicians perspective,” in which she noted that HIV makes TB worse, and vice versa. HIV infection is a risk factor for the rapid progression of TB following exposure. HIV related TB is different from TB alone, and TB causes HIV to progress faster. “To win the war on TB we have to get the community CD4+ up,” said Conradie.

Dr Shabir Madhi, Executive Director, NICD/Professor of Vaccinology, University of the Witwatersrand, delivered a discussion entitled “TB in children – declining incidence of hospitalization,” in which he noted that there is conflicting evidence on the efficacy of isonicotinylhydrazine (INH) prophylaxis in HIV-infected children.While INH it is not efficacious in preventing primary TB, it plays a role if the patient is severely immunocompromized. Madhi further added that while antiretroviral therapy (ART) can reduce the TB burden, there remains a high residual burden of TB, despite availability of highly active antiretroviral therapy (HAART). “The underlying TB in South Africa is an important risk factor for childhood pneumonia hospitalization, particularly pneumococcus, which can be mitigated by pneumococcal conjugate vaccine (PCV) immunization,” said Madhi.

Lesley Scott, Department of Molecular Medicine and Haematology, University of the Witwatersrand and National Priority Program, NHLS, shared an update on the Gene Xpert MTB/Rif program in which she noted that as of 31 January 2014, 2,815,879 Gx tests had been performed in South Africa as a result of the project which had started in March 2011 and reached 100% coverage in September 2013. To date she noted that 1,035 laboratory and 5,332 clinic staff had been trained on the Gene Xpert machines.

While a number of academics and leading researchers in the TB field made presentations on the day, the overwhelming message was that HIV/AIDS is a major driver of the TB epidemic. High numbers of patients progress to active disease leading to further exposure and amplifying the risks of new infections in an already vulnerable population. Increasing access to anti-retroviral drugs has been very important in attempting to turn the tide of TB around.

While TB is a curable disease, drug resistant forms of this disease are on the rise globally. South Africa has the fourth highest burden of multidrug resistant TB (MDR TB) globally, with one in 50 people diagnosed with TB likely to develop MDR TB. According to the NICD-NHLS, although the relative proportion of TB patients that develop MDR TB appears to be low in South Africa, the large pool of TB patients means that this small proportion still translates to a large absolute number of more than 10,000 new cases of MDR TB, diagnosed annually. This number is likely to be an underestimation of the true burden of disease in South Africa. The experts note that early appropriate treatment for TB increases treatment success rates and reduces the risk of TB transmission to others.

According to the NICD/NHLS TB, and in particular drug resistant TB, remains one of the biggest public health challenges of our time. People with a cough for more than two weeks should go to their clinics to be tested for TB. It is important to note that the infectious risk of TB cases drops dramatically when they are placed on effective appropriate treatment. In addition, people are strongly encouraged to know their HIV status as early diagnosis and appropriate preventive treatment will significantly reduce their risk for TB.