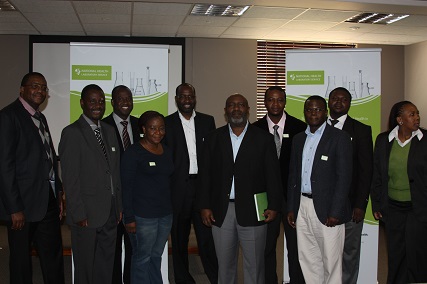 On Friday, 25 July 2014 at the National Health Laboratory Service (NHLS) Campus in Sandringham, Johannesburg, the African Society for Laboratory Medicine (ASLM) announced preliminary Stepwise Laboratory Quality Improvement Process Towards Accreditation (SLIPTA) audit results of 14 audited laboratories.10 of the 14 NHLS laboratories had recently participated in the Strengthening Laboratory Management Towards Accreditation (SLMTA) program, with one – the Northdale Laboratory in KwaZulu-Natal – garnering a 5 star rating.

SLMTA is a training and mentoring tool that assists laboratory management to implement quality management systems (QMS) with the goal of producing measurable improvements and preparing laboratories for accreditation, based on international clinical laboratory standards. The NHLS decided to use the SLIPTA checklist to measure the impact of SLMTA . SLIPTA is a framework to encourage, support, and recognize the implementation of QMS. The introduction of both the framework and program at the NHLS laboratory facilities was supported through technical assistance and funding by the Laboratory Branch of CDC South Africa, as a partner to the National Department of Health (NDoH) and the NHLS. 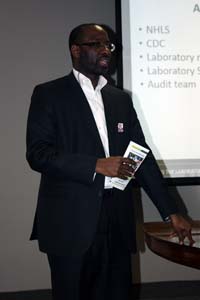 It is envisioned that the SLMTA approach, will increase the pace of readying laboratories to be accredited by providing much needed training and support in a number of key focus areas, including human resources (HR), results recording, and record keeping. The outcomes, according to CDC South Africa Laboratory Branch Chief Varough Deyde, should be not only be an increased turnaround time for the patient, but also an improvement in the quality of testing, less safety incidences and increased biosafety, as well as better interactions with clinicians, and therefore improved confidence in the laboratory.

Currently 103 NHLS laboratories are accredited in 25 facilities across the country. “The program has become absolutely fundamental and we have got to accelerate it,” said Sagie Pillay, CEO of the NHLS. The introduction of SLMTA can be considered part of the transition currently underway in NHLS laboratories. “This is what we have got to be giving the patient at a minimum,” said Pillay, adding that NHLS supports approximately 80% of South Africans in this respect.

The implementation of SLMTA at the 10 laboratories and the subsequent audit process using the SLIPTA checklist by the ASLM, in collaboration with WHO AFRO, of those 10 and 4 additional control laboratories serves as the Pilot Project for the process, which is to be rolled out at a number of other NHLS laboratories going forward. Commencing locally in 2013, it involved not only a massive investment of resources, but also an investment of time by the ASLM auditors, the trainers involved, the laboratory staff, senior managers, area managers, and CDC South Africa staff. The process itself involved baseline internal audits, three workshops, three cycles of 2 site visits and the sharing of an improvement plan, an internal exit audit, before the ASLM audit itself. The entire process can collectively take 18 to 24 months.

The participating SLMTA laboratories represented 8 provinces, and were as follows: 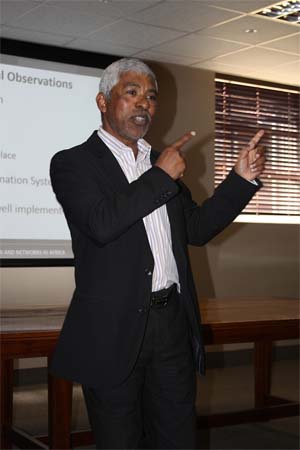 “The program has become absolutely fundamental and we have got to accelerate it,” said Sagie Pillay, CEO of the NHLS at the launch of the WHO AFRO SLIPTA SA Audit Report by ASLM on 25 July 2014 in Sandringham, Johannesburg.

The four control laboratories audited by ASLM were all from KwaZulu-Natal and included:

One laboratory, following the ASLM exit audits,received 5 stars – the Northdale Laboratory. This is a remarkable achievement as this is only the second laboratory to receive 5 stars in the ASLM performed SLIPTA audits of 85 laboratories to date in 18 Countries. This also means that the Northdale Laboratory is now in a position to apply for accreditation through the South African National Accreditation System (SANAS).