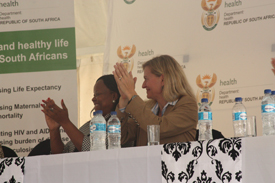 Deputy Health Minister, Dr. Gwen Ramokgopa and U.S. Consul General Erica J. Barks-Ruggles give applause to one of the speakers at the 2014 launch of the Rotary Family Health Days (RFHDs) programme initiative in the Eastern Cape Province.

The Rotary Family Health Days (RFHD’s) is a Health Programme ran in all nine provinces in South Africa over three days to bring free, comprehensive and holistic health care service to people in disadvantaged communities in both rural and urban areas across South Africa.

This multi-partner program initiated by the Rotary Action Group RFHA (Rotarians for Family Health and Aids Prevention), was piloted in South Africa in 2013, and was launched by Health Minister Dr. Aaron Motsoaledi. RFHA receives an unprecedented commitment from the South African Government’s National Department of Health (NDOH) in partnership with CDC, USAID and other partner organizations. The U.S. Government, through PEPFAR, facilitates the collaboration between the NDOH, Rotarians for Family Health and AIDS prevention (RFFA), and partner NGOs such as TB/HIV Care, Foundation for Professional Development (FPD) and IYDSA, as well as providing on-going technical assistance to the NDOH and RFHA in the rollout of this initiative.

In 2013 the RFHD Programme saw over 68 000 people move through sites with an estimated ¼ million health interventions over 3 days. Re-introduced by the Deputy Minister of Health, Dr. Gwen Ramokgopa this year the campaign ran from April 1 – 3 and set out to provide free health screenings to over 80,000 participants at over 164 sites in all 9 provinces– an amazing achievement by any standard. 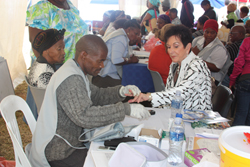 Founder of the Rotary Family Health Days (RFHDs) Marion Bunch takes an HIV test at the 2014 launch of the RFHDs in Uitenhage – Eastern Cape Province.

This year, the U.S. Consul General Erica J. Barks-Ruggles, was among the key note speakers at the launch and she spoke to the importance of strengthening health systems in South Africa. Barks-Ruggels said: “The importance of strengthening comprehensive health screening services especially ensuring access for the most vulnerable in South African society cannot be underestimated and was most recently highlighted by Minister of Health, Dr. Aaron Motsoaledi’s announcement that R500 million funding from The Global Fund would be used to screen 150,000 inmates at correctional services facilities and 500,000 mine workers, as well as a further 600,000 people living in and around the mines – for TB.

“Although the RFHDs programme was initially developed to address the critically important issue of HIV and AIDS in Africa, what makes it somewhat unique is, in addition to contributing to the nationwide HIV Counseling and Testing Campaign which was re-launched by the National Department of Health in 2013, it has also expanded to focus on strengthening comprehensive health screening services through offering TB testing, the provision of condoms, diabetes and blood pressure screening, and measles vaccinations, amongst others. This far reaching effort is in line with the National Health Plan which seeks to improve comprehensive primary care for all South Africans.” 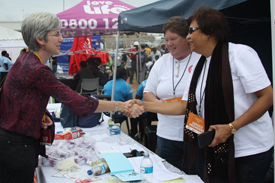 Rotary Clubs set up temporary clinics in various areas close to squatter camps and townships within easy reach of the community. Services on offer include testing and counselling and screening for HIV Aids, TB, Diabetes, Hypertension and many other diseases as well as immunizing children against POLIO and measles, deworming and Vitamin A administration. Rotary clubs also contributed by bringing “add on” services unique to each site such as optometrist, dentists, chiropractors, distribution of wheelchairs, and hand washing education.