At risk in paradise 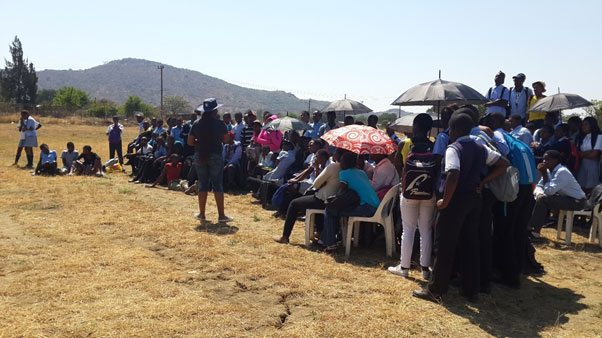 The Bojanala District is situated in the north-eastern corner of South Africa’s North West Province. While undeniably one of the most beautiful parts of South Africa, attracting eco-tourists and adventure seekers from around the world to this piece of paradise – but Bojanala is also mired in poverty and the social ills that accompany it.

The wealth from the platinum mines has not reached the locals; the majority of those employed by the mines are migrant labourers from other parts of the country. Local unemployment is estimated at more than 40% and around 67% of households earn less than R1 600 (USD 147.40) a month. Many of these indigent households are headed by women.

The population is young – nearly 39% are 19 years old or younger – and the levels of education low; nearly 35% of adults are functionally illiterate, with only 20% having completed high school. Apart from access to the mines, local infrastructure is poor and hallmarked by inadequate health services, poor roads and transport arrangements, and a lack of telecommunication facilities. These factors combine to put Bojanala residents dangerously at risk from HIV infection, explains CareWorks’ Rachael Rawlinson.

CareWorks – a President’s Emergency Plan for AIDS Relief (PEPFAR) funded Centers for Disease Control and Prevention (CDC) South Africa partner – approached three schools in Bojanala with a view to reaching adolescents, particularly girls, in order to educate and empower them with both the knowledge of their own HIV status, as well as information on how to protect themselves from HIV transmission. “With gender equality a key component of the fight against HIV, supporting women and girls is a priority – especially in poverty-stricken areas with large migrant populations, where transactional sex is such a danger,” says Rawlinson.

However, school campaigns come with their own challenges, not least of which is securing a time to address the pupils that do not impact on their lessons and exams. “We were advised by the Department of Health that it would be illegal for us to conduct our programme on school premises, and so finding transport to a suitable venue became an issue,” says Rawlinson.

Peer pressure is always a factor when dealing with adolescents, and CareWorks found the assistance of the Life Orientation teachers invaluable in addressing this, as well as overcoming concerns among the pupils about the programme. These teachers not only supported CareWorks’ in-school mobilization campaign, but also identified pupils who were most in need of the intervention the programme provided.

The Life Orientation teachers also requested that CareWorks address their classes about HIV, STIs, etc. CareWorks’ Masibambane Programme, developed in line with the reporting and indicator requirements of PEPFAR and with the view to deliver a high standard of combination prevention education, was modularised for introduction into schools.

“The Masibambane Programme proved very popular and effective due to the interactive manner in which we present the material (prevention games, acting out the information, etc.). In this way we were able to establish a relationship with the pupils, which helped mobilize them to participate in the programme,” says Rawlinson.

Three high schools have been targeted in the first three months of the programme. HIV counselling and testing (HCT) has been conducted, and the pupils are ready to be trained as Peer Educators in order to create sustainability within the school, post CareWorks’ campaign period. The Peer Educator training was set to take place at end October 2014.