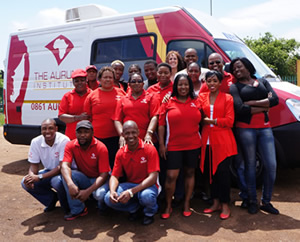 Inspiring quotes about innovation and working together plaster the walls at the Winnie Mandela Male Sexual Health Clinic in Tembisa, South Africa, based in a township outside of Johannesburg. But the sentiment is far more than decoration—it’s the heart and brains that drives the clinic to become a model of success.

Using metal cargo containers as low-cost buildings for the clinic, developing the team strategically, creating mobilized outreach community programs, setting up HIV counseling and testing (HCT) as a first separate stage, creating an electronic-based system, and creating a diversity of counseling services are the cornerstones of their successes. “We are always looking for innovation,” said Helen Kirsby-Green, Director of Operations. “We are determined to constantly review and change to serve our patients and the community better.” The location for the medical male circumcision (MMC) clinic was carefully chosen near a primary care facility to serve a poor, dense population of 80,000 with squatter camps, people out of work, and a hub of people coming and going. Yet the area has important catchments to bring people in, like a library, schools, hospital, and taxi stands.

But if they had waited for people to come in, they wouldn’t have celebrated serving their 10,000th circumcised client on October 26, 2012, after officially opening in little more than one year. They started at 20 clients per day and are now at 80.

MMC clinics are just one tool in the national plan to lower the rate of HIV in South Africa. Multiple studies have shown that circumcision reduces rates of HIV by 60%. But the clinic goes beyond just MMC. It is designed to be a hub of integrated care and counseling that achieves a greater health impact in the community.

Outreach teams are an essential key to success by educating and recruiting patients, generating community demand, and building trust in the community. The teams and their mobile vans reach out to workplaces, labor unions, public places like train stations, taxi stands, shopping malls, and schools. They even go door-to-door, reaching out to shacks in the surrounding squatter camps. In addition to recruiting men to undergo medical male circumcision – an evidence-based method of preventing HIV transmission — these teams provide HIV counseling and testing and other health services.

The clinic is a smooth set of operations: incoming men are divided into “buddy” teams, supporting each other through each efficient step of being registered, counseled and tested for HIV, introduced to the procedure, undergoing health examination, and finally ending with the circumcision. This buddy system in a setting of quality and quantity creates a safe, trustworthy, and nurturing environment. No patient wanders or wonders where he’s to go, and they’re never alone.

A separate parent-preadolescent program was developed for those younger than 15 years (studies show most adolescents are sexually active at age 15). The mother and child are kept together. Staff has learned that the parent doesn’t brief the child beforehand, and that the child doesn’t tell the mother about the 48-hr hygiene practices after MMC to ensure rapid healing. So both are instructed at the same time.

Finally each male going through the process is exposed to gender education. Aurum educates boys and men about masculinity and dispels gender stereotypes that are common in the area. The counselors work to build knowledgeable ambassadors in the community, since friends believe what friends say. It’s an open forum, where older males can overhear the teen’s discussion and learn. Older men also receive messages on reducing multiple, concurrent sexual partners.