“I first learned I was HIV positive in 2007, when I was pregnant with my first child,” says Priscilla, as she shares her story from Komarock Clinic, in Nairobi, Kenya, which is run by CDC Kenya partner Eastern Deanery AIDS Relief Program (EDARP)External.

A young boy waits in the PMTCT clinic with his mother.

A young boy waits in the PMTCT clinic with his mother.

At 29 weeks into her pregnancy, she was provided with nevirapine to reduce the risk of transmission to her unborn child. After delivery, her baby boy was given nevirapine for 7 days and she continued on Septrin to reduce risk of opportunistic infections. Her son is now 8 years old, healthy and HIV negative.

Last year, Priscilla gave birth again, but her treatment during pregnancy was different this time. When she came for antenatal care, the staff at CDC-supported Komarock Clinic asked her to start full antiretroviral therapy as part of the new Option B+ effort to place HIV-positive pregnant women on antiretroviral treatment for life regardless of their CD4 count.

Keeping mothers safe and healthy and providing services to ensure that infants born to women with HIV do not become infected are key strategies to achieving an AIDS-Free Generation in Kenya. In 2012, the Ministries of Health in Kenya launched a campaign to step up the approach to preventing mother-to-child transmission of HIV (PMTCT) and work toward elimination of mother-to-child transmission of HIV (eMTCT).

Kenya is among the 22 countries which collectively account for 90% of pregnant women living with HIV. Without proper care, about 40% of all babies born to women with HIV will acquire the virus either during the mother’s pregnancy, during childbirth, or during breastfeeding. However, PMTCT programs in Kenya have made significant inroads in reducing the proportion of infants who acquire HIV from their mothers. Each year in Kenya, it is estimated that 100,000 women with HIV give birth and nationally, about 11,000 (11%)[1] of their infants become HIV positive with some regions having achieved eMTCT.  This has been an improvement, but the goal is to reduce the number of babies acquiring HIV to less than 5% of births to HIV-positive women.

In Kenya, where almost 100% of PMTCT services are supported by the U.S. President’s Emergency Plan for AIDS Relief (PEPFAR), 96%[2] of all women attending ANC are provided HIV testing and counseling, an important achievement.  Currently, PEPFAR programs supported by CDC have been able to provide preventive treatment to 90% of those who test positive.[3]

But challenges remain. Only 7 out of 10 pregnant women in Kenya attend the four scheduled antenatal care[4], so HIV-exposed infants may not receive preventive treatment. Further, only 4 out of 10 Kenyan women are attended at birth by a healthcare professional.[5] 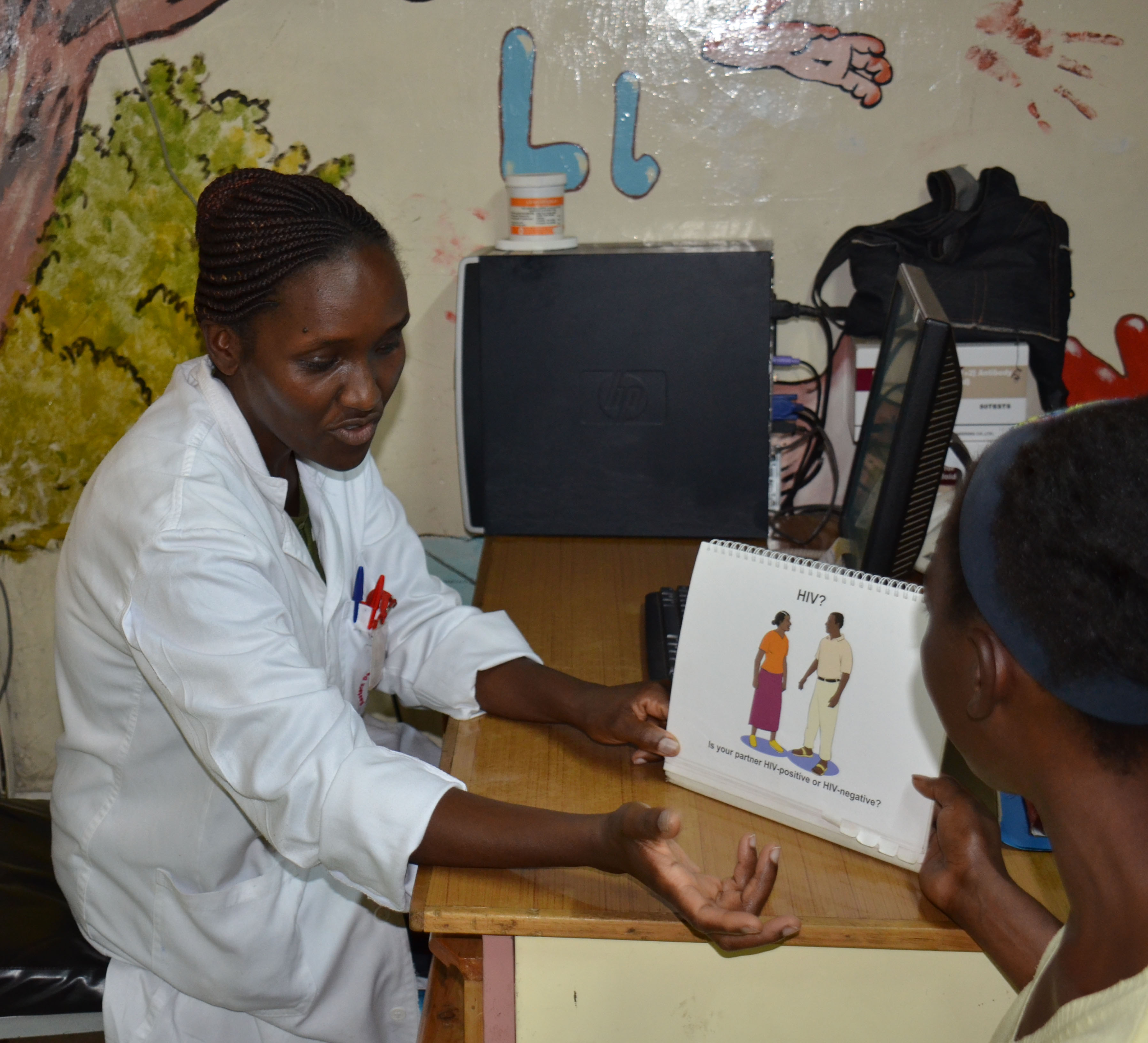 “Antenatal care, skilled birth attendance and postnatal follow-up for pregnant women with HIV are critical to ensuring that mother and child receive the best care and that each receives the medications needed to ensure that the baby remains HIV negative,” notes Dr. Abraham Katana, Chief of CDC Kenya’s HIV Services Branch.

Despite the challenges, the goal of eMTCT has been inspired by achievements in Kenya and is believed to be a realistic, achievable goal. As one of the principal U.S. government agencies implementing PEPFAR programs, CDC is working with the government of Kenya and other partners toscale-up current PMTCT activities and roll out new strategies. One of the most important is to keep mothers alive to care for their children.

In Kenya it is estimated that HIV and AIDS contributes to 20% of maternal deaths, which is already unacceptably high. Kenya’s updated HIV treatment guidelines, launched in July 2014 and based on recent guidance from the World Health Organization, now offer all mothers who test positive for HIV immediate life-long antiretroviral therapy, regardless of their CD4 count. In 2013, before the new recommendations were adopted, only about 25% of mothers with HIV in Kenya were on lifelong ART.[6] This new strategy may help save many mothers and, because it will help ensure mothers like Priscilla are healthy should they become pregnant in the future, it will prevent many infants from becoming HIV-infected.

Priscilla now nurses a happy and healthy baby. “The PCR test at 6 weeks was negative,” she notes. With treatment, Priscilla’s children will have the best chance to remain HIV negative throughout breastfeeding, and any children she has in the future are much more likely to be HIV negative, just like her first two children.