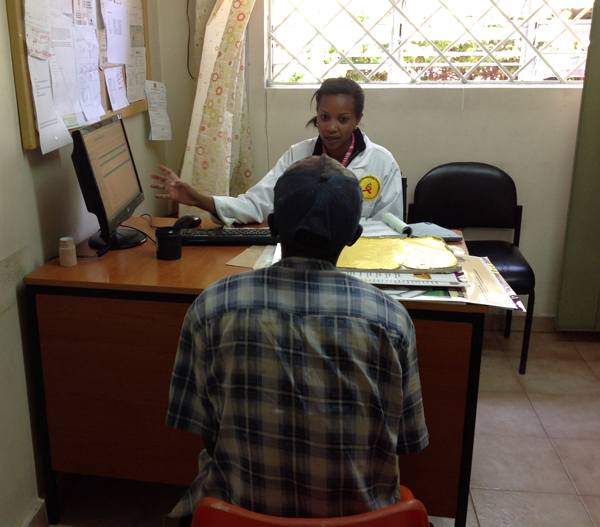 Among persons living with HIV in Kenya, tuberculosis (TB) is the single leading cause of death. With more than 35% of those with TB infected with HIV, TB and HIV coinfection creates a substantial burden on Kenya’s health system and among patients, their families, and local communities.

Dr. Herman Weyenga, TB/HIV technical advisor for CDC Kenya, works closely with the Ministry of Health in Kenya. “To address the challenge of TB among people with HIV, the government of Kenya, with support from partners like CDC, has made changes to public health programs and policies that have helped the country exceed its goals of identifying and treating people with TB/HIV coinfection.”

Leading many other high burden countries, Kenya now tests over 95% of TB patients for HIV and provides antiretroviral therapy (ART) to over 86% of people who have both TB and HIV. With support of the U.S. President’s Emergency Plan for AIDS Relief (PEPFAR), Kenya is addressing the quality of TB screening, expanding access to new TB diagnostics, and on World TB Day 2015 is launching a national program to provide a drug called isoniazid to prevent TB among people living with HIV.

Detecting TB among HIV patients is essential to reducing illness and death. In 2005 Kenya implemented HIV testing for all TB patients. By 2013, HIV testing had been scaled up to reach over 95% of all TB patients who are in care. Then in 2009, with PEPFAR support, the country began intensified TB case finding among people living with HIV. They used symptom-based screening and, by 2014, over 90% of HIV patients were screened for TB on their last clinical visit.

When a person with HIV has TB, getting treatment for HIV can significantly improve health outcomes. In 2014, Kenya implemented the World Health Organization’s revised ART guidelines, which included the recommendation to immediately begin ART for people living with HIV who are diagnosed with TB.

In addition to policy change, CDC and other U.S. agencies implementing PEPFAR assisted Kenya with improving TB/HIV coordination and oversight, increasing health provider training on TB care and treatment, and ensuring that the country prioritized acquiring drugs and supplies that are necessary to prevent and treat TB.

Changing the way TB and HIV programs were implemented improved the ability of clinics to support TB/HIV patients. More than 75% of PEPFAR-supported clinics have fully integrated their TB and HIV services. By 2014, nearly 2,000 clinic sites that provided ART also provided TB treatment.

Still, more work needs to be done. In 2013, there were nearly 90,000 cases of TB disease reported in Kenya, of which nearly 32,000 cases were estimated to be patients co-infected with HIV. While this presents a considerable challenge, the policy and program changes that Kenya has implemented and the addition of new tools like isoniazid preventive therapy will go a long way in addressing TB/HIV coinfection and helping people living with HIV remain healthy and live longer.

Get more TB facts from CDC at: https://www.cdc.gov/tb/topic/basics/