Ask a CDC Scientist: Dr. Terrence Tumpey and the Reconstruction of the 1918 Pandemic Virus

In 2005, microbiologist Dr. Terrence Tumpey was approved by then-CDC director Dr. Julie Gerberding to use reverse genetics to reconstruct the 1918 influenza virus, which had been lost to history following the devastating pandemic of 1918. The decision to recreate the 1918 virus was made very carefully by senior government officials and then carried out under strict controls. Dr. Tumpey was chosen to be the only person authorized to work on the 1918 virus, and then only under biosecurity level 3 enhanced (BSL-3E) precautions. For example, to reduce risk to colleagues, Dr. Tumpey worked alone after normal agency hours. His health was continually monitored and he took influenza antiviral drugs preventively as a precaution in case he was exposed to infectious virus. This remarkable and historic scientific and public health accomplishment was the culmination of years of collaborative work. Using the decoded gene sequence of the 1918 virus obtained by researchers at the Armed Forces Institute of Pathology and plasmids provided by scientists at Mount Sinai, Dr. Tumpey was the first person to physically reconstruct and then study the live and complete 1918 virus in a laboratory setting. Today, Dr. Tumpey is the branch chief of the Influenza Division’s Immunology and Pathogenesis Branch (IPB) at CDC. One hundred years after the 1918 pandemic, I sat down with Dr. Tumpey to talk about his work on the 1918 virus and its significance. 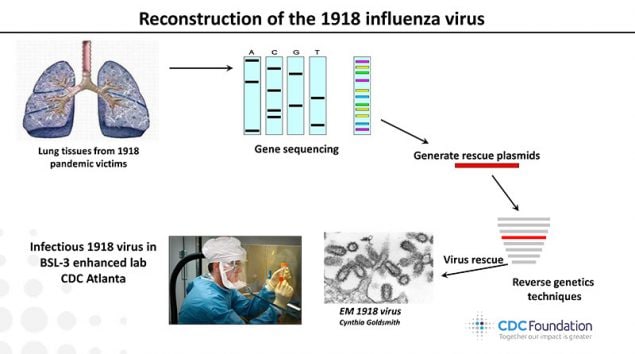 This image shows the order of events leading up to the reconstruction of the 1918 virus by Dr. Terrence Tumpey within CDC’s biosecurity level 3 enhanced laboratory.

Why do you think it’s important to look back on the 1918 pandemic?

Dr. Tumpey: The 1918 influenza pandemic was exceptional as it killed at least 50 million people worldwide, making it the worst influenza pandemic in recent recorded history. Clinicians and scientists of the time were grappling with many unknowns, and what added to the confusion was the erroneous belief that the disease was caused by a bacterium  ̶  not a virus  ̶  called Pfeiffer’s bacillus (a gram-negative bacterium now recognized as Haemophilus influenzae). It wasn’t for another 30 years that people would understand that the 1918 pandemic virus that infected 30% of the world’s population was an influenza A (H1N1) virus. Because of its impact, the 1918 pandemic is sometimes referred to as the “Mother of all Pandemics,” and it continues to inspire research on its origins and the relationship between the 1918 virus and other influenza viruses.

How or why do you think the 1918 pandemic is still relevant today?

Dr. Tumpey: Understanding the unique features of the 1918 pandemic is especially relevant, as nearly a century later, a descendent of this virus emerged to cause another pandemic. Reports of a novel swine-origin H1N1 virus (2009 H1N1) causing influenza-like illness, pneumonia, and death in people were first announced in April 2009. Laboratory-confirmed cases of human infection rose rapidly as the virus spread. A pandemic was declared on June 11, 2009, at which time 74 countries had reported more than 28,000 human infections with 144 deaths. That virus has continued to circulate as a human seasonal influenza virus since the 2009 pandemic.

How did you become interested in flu as a career path?

Dr. Tumpey: I became very interested in influenza during my graduate studies at the University of South Alabama Medical School. The study of influenza was part of my graduate coursework, and I was always shocked by the exceptionally high mortality rate of the 1918 influenza pandemic. Moreover, in lecturing about the ability of some influenza viruses to spread efficiently between people, one professor gave the example of three people sitting in a room; one has HIV, one has Ebola, and the other is infected with a human influenza virus.  If you spend time with those three people in the room (with no contact), which virus will make you sick? That example also got me interested in influenza and influenza transmission. I applied for an American Society of Microbiology (ASM) postdoctoral fellowship with Dr. Jacqueline Katz and received a two-year fellowship to work at CDC’s Influenza Branch and never looked back.

What is the most rewarding part of your work?

Dr. Tumpey: In general, I feel very fortunate to have had the opportunity to study the 1918 virus and other influenza viruses. I particularly enjoy the process of scientific discovery and mentoring trainees in the laboratory. The reconstruction of the 1918 virus also allowed us to study its individual genes and determine why the H1N1 pandemic virus was so lethal. The 1918 virus work revealed a prominent role for the polymerase proteins in enhanced virulence, which resulted in scientists generating new ideas for improving the development of novel antiviral drugs directed against these viral polymerases. As a result, it has been rewarding to see the development of and clinical trials associated with these novel antivirals. These new medications represent an important development as they can potentially expand our available tools against influenza disease.

What are some of the highlights of your research and career?

Dr. Tumpey: I am particularly proud of the characterization of the reconstructed 1918 pandemic virus and subsequent work studying that virus which killed so many. The work, as reported in the October 2005 issue of Science (vol. 310, p 77.)external icon, was done using a technique called reverse genetics to re-create a living 1918 virus.

How did recreating the 1918 virus make you feel?

I was very excited, and I was very anxious in 2005. When you’re getting ready to remake a virus that is estimated to have killed at least 50 million people worldwide, I was passionate about the great task ahead. I was very fortunate to have the support of CDC and NIH. Before the experiments began, the CDC Office of the Director provided oversight and guidance for this important project.  In particular, they carefully evaluated the specific studies to be conducted and concluded that this research could safely and securely be done under BSL-3-enhanced containment. It was decided that I would be the only scientist to rescue the 1918 virus at CDC and I was required to take additional safety precautions that included taking influenza antiviral prophylaxis. In addition, procedures were in place, such that if I experienced influenza-like illness I would quarantine myself at home and avoid contact with the outside world.

Scientifically, everything was in place to be able to remake 1918 influenza virus using a technique called reverse genetics. I was thrilled to be the first person to fully rescue the 1918 virus in the summer of 2005. During multiple weeks in July 2005, my collaborators repeatedly asked me, “Do you have it?”  “Has the 1918 virus appeared in culture yet?”  When the 1918 virus finally appeared in my BSL-3E cell culture and I knew I had the historic virus in hand, I simply sent an email to my collaborators that read, “That’s one small step for man, one giant leap for mankind.”  They knew from the playful email that the 1918 virus was rescued. Overall, the virus rescue was very rewarding and it allowed the 1918 pandemic research to move forward and provide the scientific field with innovative discoveries.  In particular, the identification of novel influenza viral factors and new ideas for improving the development of antiviral drugs against all influenza viruses has been gratifying and exciting to watch.

Why was it so important to study the 1918 virus?

Dr. Tumpey: Because the coding sequences of the 1918 viral RNA segments did not reveal obvious genetic features that had been associated with virulence, so it was important to study 1918 recombinant viruses to better understand the genetic markers responsible for virus replication and virulence of this pandemic strain. Thus, I felt like the molecular characterization of the reconstructed 1918 pandemic influenza virus shed light on why this virus was such a killer. 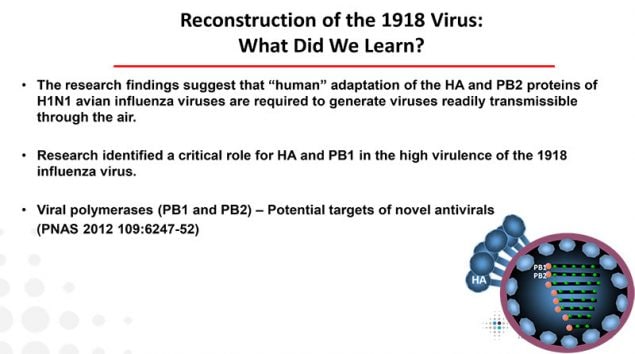 This image lists lessons learned from the study of the reconstructed 1918 virus at CDC and why it was so deadly.

What did you learn about why the 1918 pandemic virus was so deadly?

Dr. Tumpey: We found that the HA and PB1 virus genes of the 1918 virus are essential for maximal replication and virulence. With these data in hand, some scientists felt that these virus genes could be a potential target for a new generation of anti-influenza A drug development. We feel that the quality of the 1918 virus work and end result of the project was remarkable.

How do laboratory safety precautions factor into your job and that of your branch?

Dr. Tumpey: It is increasingly important that staff adhere to biosafety and biosecurity requirements. I am a Select Agent principal investigator (PI), and as PI, I am responsible for full compliance with the policies, practices and procedures put forward by the Select Agent program and Office of the Associated Director of Laboratory Science and Safety (OADLSS). Actually, this important responsibility extends to all aspects of biological safety involving the laboratory environment and all people who enter the BSL-3E space.

Dr. Tumpey: My role during the 2009 H1N1 pandemic was to perform laboratory experiments with 2009 H1N1 influenza viruses to see how well the virus spread and how severe it was as well as to help evaluate immunity to this novel virus. This helped us assess the potential harm this virus could cause. This was important since the full clinical spectrum of disease caused by 2009 H1N1 influenza viruses and their transmissibility were not completely understood. CDC’s Influenza Division was the first to show that in contrast to seasonal influenza viruses, 2009 H1N1 influenza viruses caused increased morbidity, replicated to higher titers in lung tissue, and were recovered from the intestinal tract of intranasally inoculated ferrets. Interestingly, we found similarities between the 2009 pandemic H1N1 virus and the 1918 H1N1 virus. This was based on several serological studies of the 2009 H1N1 viruses that provided evidence for the presence of cross-reactive antibodies to the 1918 H1N1 virus. Using this information, we demonstrated that vaccination with the seasonal 2010-2011 vaccine (containing the 2009 H1N1 virus) induced neutralizing antibodies to the 1918 virus and protected ferrets against 1918 influenza virus infection. This was a simple study that showed that the seasonal inactivated influenza vaccine that most of us receive would provide protection against the reconstructed 1918 virus which, as a select agent, is considered to pose both biosafety and biosecurity threats.

Do you have any final thoughts on how the lessons learned from your research can help us prepare for the next pandemic?

Taken together, influenza vaccines and antiviral drugs represent critical tools to reduce the burden of influenza virus infection, and they feature prominently in pandemic preparedness and response frameworks. Through the identification of which 1918 virus genes are important for morbidity and the development of vaccines and antivirals, it is clear that reconstruction of the 1918 virus has provided invaluable information towards pandemic preparedness efforts.

Thank you for your time, Dr. Tumpey!