Español
Related Pages
Cdc-pdfView Transcript Cdc-mediaLow Resolution Video
Webinar Slides: 100 Years Since 1918: Are We Ready for the Next Pandemic? 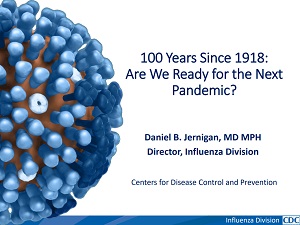 MODERATOR: Good Afternoon and thank you for joining us today.  I’m Nancy Messonnier, Director of the National Center for Immunization and Respiratory Diseases at CDC.  And I am delighted to have you join us today for our partner webinar entitled, Commemorating 100 Years Since the 1918 Flu Pandemic.  The 1918 Flu Pandemic was a historic global event that killed more people than World War I, II and the Korean and Vietnam Wars combined.  It is one of the most devastating health events in recorded world history.  Next year marks 100 years since this historic event and we at CDC would like to take this opportunity to recognize just how far we have come in our understanding of the influenza virus, our ability to monitor and track circulating viruses in development of a vaccine and our nation’s preparedness capabilities.  We also know that there is much more work that can be done to make us better able to respond to the next pandemic.  And we know that it is not a question of if we will have another pandemic, but a question of when.  Today’s webinar speaker is Dr. Dan Jernigan, Director of the Influenza Division at NCIRD, CDC.  Dr. Jernigan will provide a brief historic overview of the pandemic and highlight achievements over the past 100 years.  And also, identify opportunities to improve our ability to detect and respond to pandemic influenza.  Dr. Jernigan will also share information on CDC’s commemoration objectives and resources to hopefully facilitate your organization’s involvement in commemorating 2018 as the century of the 1918 pandemic should you be interested in doing so.  Most importantly, we’re interested in hearing from you, our partners, on ideas for highlighting this historic event.  We look forward to hearing from you and working with you over the coming year.  Thank you and now I’ll turn it over to Dr. Jernigan.

MODERATOR: And we’ve been asked, we’re summarizing some questions here, but who decides what is considered a pandemic?

DR. DANIEL JERNIGAN: So, a pandemic, just by definition, like we’ve mentioned, is where you have a novel influenza virus for which the population has either no immunity or have very little immunity to and which can transmit efficiently from one person to more than one person and can be sustained.  So that’s the simple definition of it.  during 2009, the actual global determination, the call, was made by WHO; prior to that though, many countries…we all knew what was actually happening, but I think to have it called a pandemic, the WHO, actually the Emergency Committee is the one I think that makes the final call.  However, whether it’s called or not, doesn’t really matter, the activities that the CDC and the Federal government will be doing in order to begin that mitigation cascade of activities will happen.  In fact, even with the emergence of a novel influenza virus, in China where there may be two or three cases, we begin that pandemic response by characterizing the virus, developing vaccines, making sure the diagnostics can pick it up and determining whether the antivirals will be effective or not.  so, responding to potential pandemics occurs all the time; whether it’s called a pandemic is, from the global standpoint, we work with WHO on that, but from the response standpoint, the U.S. government acts much quicker than that.

DR. DANIEL JERNIGAN: So in the United States, a mantra is that our seasonal activities are the infrastructure for our pandemic activities.  And so whether they are adequate or not or whether they can scale up is a different question, but our belief is that the best way to be prepared is by having systems that are routinely doing that kind of work.  And so, for 2009 we were able to move from weekly reporting up to daily reporting, we added new surveillance systems, we had a whole series of new communication activities, a number of mitigation and community mitigation activities.  All of that was done, built on existing infrastructures, at least from the CDC’s standpoint.  The vaccine was even delivered using the existing vaccine contracts and the vaccine systems that we have with vaccines for children; all of that, we feel that having the existing infrastructure used for pandemic is important.  Is it sufficient?  That’s a good question and one way that we look into that is by having exercises so that we check to see is the system that we think going to be used for pandemic able to do it and so we can do that through exercises.  And frankly, through the 2009 pandemic, which was sort of the biggest exercise for a bad pandemic.

MODERATOR: Another question we have is what do we think is needed to actually improve flu vaccine?

DR. DANIEL JERNIGAN: So what do we think is needed to improve flu vaccines?  I’ll refer to the current vaccines that are out there and so currently, we are able to monitor what’s happening with influenza viruses and we can say what the currently circulating viruses are, what are the predominant ones and we’re even using forecasting now with mathematical modelers and others to try and tick those viruses that are on their way up, the emerging viruses.  So that activity, I think, can tell us what’s happening.  The issue right now is that the vaccine requires about six months for it to be prepared.  And so from a time that a decision is made to start making the vaccine until when it can be injected into people, can be six months.  And so in that time, you can see changes in the viruses that are circulating; is what happened in 2014-15.  In addition, we are seeing for one component, the H3N2 component, that when they grow in eggs, which is what’s required for the majority of the vaccines out there, there can be changes, there are changes that occur in that virus in order for it to grow in the manufacturing process that make it less similar than what’s actually circulating.  And for that reason, having technologies that may not use eggs or finding ways to get viruses that look the same but can grow in eggs, that would be one factor that would be helpful.  Things that we are seeing right  now though are increased antigen dose, like in those that are over age 65 with the high dose vaccine and also the use of adjuvants, FLUAD and other products that are out there now that use adjuvants.  So all of these technologies could possibly make incremental improvements in the vaccine; we’d love to see that.  If you can get the vaccine effectiveness just a little bit better, you can actually save significant numbers of cases and deaths, just with improvements in the vaccine effectiveness, of just even 5%.  So we look forward to seeing those things, they are happening now as we speak with the high dose, the adjuvanted, the new technologies that are being use; we would love to see more of that to make better vaccines.  There’s a question from Michael Parker saying that I heard this flu season has been more severe, is there a mismatch or is it just because H3N2 is the predominant strain this year?  So, the main answer to that is it’s the H3N2 because any year we have H3N2 we will have more hospitalizations, more cases, more deaths and it clearly disproportionately impacts those that are at higher risk, those that are over age 65 and the very young.  So H3N2 is the primary driver.  When we look at the H3N2 viruses that are actually causing disease this year, they don’t look that different than what was with us last year based on the testing that we perform of looking at the outside proteins on the virus.  However, we do see that those viruses, when they have to grow in eggs, which is the majority of the vaccine, they are less similar to what’s actually circulating.  And so for that reason, there may be an associated lower vaccine effectiveness.  We do see in H3 predominant years a vaccine effectiveness of around mid-30’s, 30%, that happens whenever we’re having, that’s the overall vaccine effectiveness over ten years for H3N2.  So when we get H3N2, it’s a worse bug and the vaccine effectiveness is not as good and that might be because of some of the egg changes.

MODERATOR: We’ve got a question about what businesses can do to prepare and help people from… keep people from going to work sick and things like that in the event of a pandemic.

DR. DANIEL JERNIGAN: Right, I think both in the pandemic, but also with seasonal flu; one thing is just to allow workers to stay home if they are ill.  We know that people want to work and the worst ones are probably the doctors and nurses that come in.  And so making it possible for people to be able to telework, making it possible for them to stay home and not infect others, also even allowing them to be in a place at work where maybe they are separated.  Those are things that definitely can help in terms of social distancing, that is getting them away from each other so that they are not transmitting as easily.  That’s hard, but that’s something that can be encouraged, especially teleworking, to help people to do that.  Doing vaccine campaigns at work is very helpful because then it makes it easy for people to get vaccinated and that impact from a vaccine can also help mitigate the issues with seasonal flu.  And then there are on the CDC website and also on the CDC Foundation website, tools for businesses that you can access for making sure that businesses are thinking about pandemic and how to respond to them and including influenza seasonal, there’s checklists and other things like that and tools to help folks that are in occupational health and that are over those kinds of issues at large corporations.  So thank you very much for the questions that you have given.  We would love to hear from folks regarding what you would like to see with the use of 1918; it was a significant period of time historically.  It had an impact on our survivability; it actually is something that you can see clearly the amount of impact from deaths due to the 1918 pandemic.  Remembering that 100 years later, I think is important.  It makes it clear to us that there are things that we can do to get ready.  Influenza is a severe disease and so we want to take it seriously and make sure that if something like this were to happen again, that we would be more prepared than we are.  So with that, thank you very much and I look forward to hearing from you all.