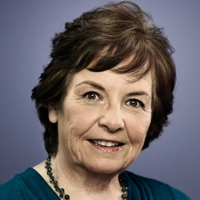 “I had a family history of cervical and uterine cancers but I didn’t get checked until I had symptoms. So if you have a family history, tell your doctor and ask if you should have special tests to find anything early.”

—Eileen A., Cervical and Uterine Cancer Survivor
Age at diagnosis: 64

I have three children, six grandchildren, and seven great-grandchildren. They keep me busy! I also take physical activity classes offered through a local hospital, including a “Healthy Steps” class, baton twirling, and belly dancing.

In August 2007, I began having heavy bleeding and I went to a nearby medical clinic. The doctors there found that I had something suspicious on my uterus. They referred me to a gynecologist who did a biopsy, which revealed I had cancer. I was then referred to a gynecologic oncologist, who did an additional biopsy on my cervix, which also showed the presence of cancer cells. To this day, the doctors say they are not sure which came first, the uterine cancer or the cervical cancer.

Today, I feel pretty good. I hope that other women will not be in denial about their risk for cancer. I had a family history of cervical and uterine cancers but I didn’t get checked until I had symptoms. So if you have a family history, tell your doctor and ask if you should have special tests to find anything early. And for women with a limited income, there are programs like New York State’s Cancer Services Program that can help.

Today cancer is no longer a death sentence. So don’t be in denial about cancer just because you think you can’t afford diagnostics and treatment if needed.