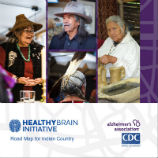 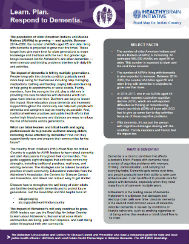 Although racial and ethnic disparities exist in life expectancy in the U.S., American Indians and Alaska Natives, like other populations, are living longer. And because Alzheimer’s disease and other dementias are more common with advanced age in any population group, gains in longevity will increasingly affect Indian Country with an increased health burden. Older people living with Alzheimer’s disease and other dementias progressively depend on caregivers and community resources as they become less able to care for themselves. As tribal leaders who deal with health and aging become concerned about the growing problem of dementia, they can build on strengths in their cultures and traditions, which provide unique opportunities to improve the lives of older adults living with dementia and to support their families and communities.

To offer a guidebook for tribal leaders, the Alzheimer’s Association and the Centers for Disease Control and Prevention, in consultation with the International Association for Indigenous Aging, created Healthy Brain Initiative: Road Map for Indian Country pdf icon[PDF – 10 MB]. Designed to support discussion about dementia and caregiving within tribal communities, this publication for Indian Country encourages a public health approach as part of a holistic response.

Developed as a companion to the Healthy Brain Initiative’s Healthy Brain Initiative State and Local Public Health Partnerships to Address Dementia: The 2018-2023 Road Map, the Road Map for Indian Country sought specific input, feedback, guidance, and direction from experts and elders throughout Indian Country. Among many findings, the consultations revealed that Alzheimer’s and related cognitive health issues are viewed as a serious and growing problem that should be approached with sensitivity to unique social, economic, historical, and cultural attributes of American Indian and Alaska Native peoples. Public health strategies are an important way that tribal health entities could address dementia.

The resulting Road Map for Indian Country is a stepping stone to bridge this gap. Designed as a conversation starter, this guidebook is intended to further discussion among American Indians and Alaska Native leaders about how to best serve the needs of their tribal elders and their families, as well as how to enhance the quality of life for those impacted.

The Road Map for Indian Country Dissemination Guide gives recommendations and guidance for promotion of the Road Map.