Get Inspired to Quit With the Tips From Former Smokers Campaign

Tonya M. explains in a new Tips From Former Smokers® TV ad that smoking took a toll on her health and became a challenge for everyone in her family, something she had never thought about before. “It went from me being their caregiver, to my husband and kids being mine,” Tonya says. “And that’s definitely not what I wanted for them. Nobody wants that for their kids.”

Tonya started smoking as a teenager because friends who smoked pressured her to try it. At the age of 16, she was smoking almost a pack of cigarettes a day. By the time her heart issues first surfaced, she was regularly smoking two packs a day. Tonya was diagnosed at age 38 with heart failure because of smoking. She had to have open-heart surgery and a battery-operated heart pump inserted in her chest to keep blood flowing through her body. She now relies on her family for help doing many of the things she can no longer do.

Tonya is just one of more than 40 people who describe in their own words how smoking has impacted their lives and those around them. Each person featured in the Tips campaign wants people who smoke to hear their message: Quit now—for your health, for your loved ones, and for your future.

Real People, Real Stories
Michael F.: Family
Audio Description Low Resolution Video
Michael F. lives with a smoking-related COPD. In this video, Michael explains that his wife used to smoke too, but she quit to stay healthy enough to take care of him.

Launched in 2012, the Tips campaign is celebrating 10 years of helping people quit smoking and live healthier lifestyles. Tips features the stories of real people who are living with serious, long-term health effects from smoking and secondhand smoke exposure. The campaign also shares stories from family members who devote their lives to caring for someone with a smoking-related condition.

Michael F.: Family
Audio Description Low Resolution Video
Michael F. lives with a smoking-related COPD. In this video, Michael explains that his wife used to smoke too, but she quit to stay healthy enough to take care of him.

Although Geri struggles with her COPD, she tries to stay positive. In Geri’s own words, “If I can help at least one person quit, then I’ve turned my curse into a blessing.” 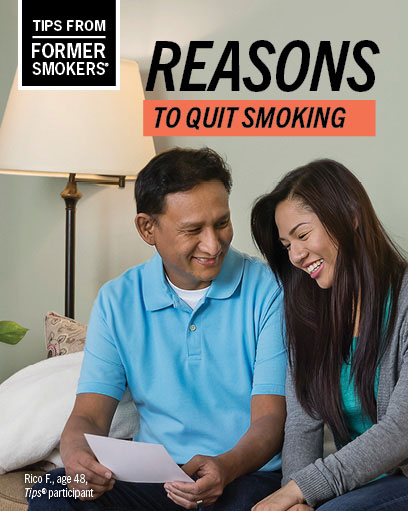 The single best way you can protect yourself from the health risks of cigarette smoking is to quit.

We understand that quitting can be hard and you may try more than once before you successfully quit. Good news! Finding the help you need is now easier than ever.

Starting in 2022, you can text QUITNOW to 333888 to enroll in a free text messaging service. Spanish-speakers can text DÉJELO YA to 333888. You will receive text messages with quit-smoking advice, tips, and motivating messages for becoming smokefree and living a healthier life.

You can also find free resources on the Tips website to help you quit and keep you motivated:

Resources to Help You Quit

Below are several free resources to help you in your quit journey. Keep trying until you find one that works best for you. Make this the year you finally quit for good!