Traditionally, polysaccharide production was detected on a starch-free medium containing 5% (w/v) sucrose. However, 5% sucrose is inhibitory for some strains ; polysaccharide may be detected on a starch-free medium containing 1% sucrose. Strains are inoculated onto the medium to give either well-isolated colonies; polysaccharide may not be detected in confluent growth. Although some strains, e.g., N. gonorrhoeae, may not grow on the medium, a polysaccharide test may be performed if a heavy inoculum is deposited on the medium. The test does not required incubation in an a carbon dioxide-supplemented (5%) atmosphere; carbon dioxide may be provided to support growth of the strain.

Figure 1. Production of Polysaccharide from Sucrose by N. polysaccharea, but Not by N. cinerea. 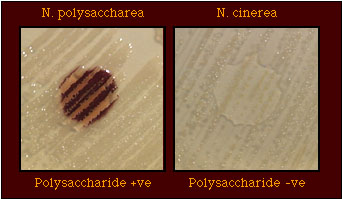 It is not possible to detect polysaccharide in the sucrose-containing medium of rapid acid detection tests such as QuadFERM+.

Optimum specimen:
A pure culture of a suspect gram-negative, oxidase-positive diplococcus on chocolate agar incubated in a carbon dioxide-supplemented atmosphere at 35C to 36.5C for 18 to 24 h.

Unacceptable specimen:
Cultures of isolates on chocolate agar incubated in a carbon dioxide-supplemented atmosphere at 35C to 36.5C for more than 24 h.

Note: Iodine solutions provided with commercially available Gram strain kit reagents may not react with polysaccharide to give a positive reaction with strains known to be positive in this test. It may be necessary to make the iodine solution from the original formulation for Gram’s iodine. Alternatively, Gram’s iodine may be used.

The reaction of a polysaccharide-positive strain may fade with time. The reaction may be developed again by adding another drop of iodine to the growth.

False-negative reactions may be obtained if inoculated medium is incubated longer than 48 h. because amylosucrase (produced by polysaccharide-positive organisms) degrades the polysaccharide that has been produced.

The polysaccharide may not be detected with commercially available Gram’s iodine reagent.

Isolates may be reported as:

“Polysaccharide-positive” if the growth of an isolate turns dark brown, purple, or black after the addition of Gram’s iodine solution.

“Polysaccharide-negative” if the color of the growth does not change color other than the color contributed by the iodine reagent.