Each year in the United States, RSV leads, on average, to—

In the United States and other areas with similar climates, RSV infections occur primarily during fall, winter, and spring. 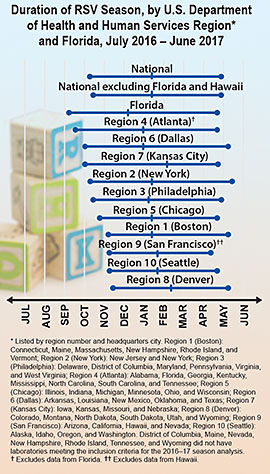 CDC collects information on RSV laboratory detections in the United States using the National Respiratory and Enteric Virus Surveillance System (NREVSS). This is a voluntary, laboratory-based surveillance system established in the 1980s to monitor trends in several viruses, including RSV. NREVSS tracks the number of RSV tests that are done by participating laboratories and the proportion that are positive, by specimen type, location, and when they were collected. Serotyping, demographic data, and clinical data are not reported. Data from NREVSS provides information to public health officials and healthcare providers about the presence of RSV in their communities.