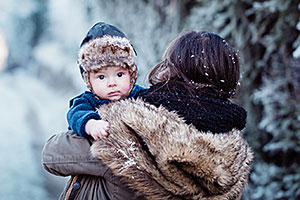 The Arctic Investigations Program (AIP) is a branch of CDC located in Anchorage, Alaska. It is comprised of epidemiologists, laboratorians, research nurses, statisticians, and support staff. AIP provides support for research studies on the control and prevention of infectious diseases, including RSV. Research areas include medical care, applied epidemiology, laboratory diagnosis, and biostatistical sciences.

Prevention of RSV in Alaskan Natives is one of the program’s priority activities. That’s because the rates of RSV, as well as many other infectious diseases, are higher among the Alaska Native population than among non-Natives in Alaska.

Some studies have shown that RSV in Alaska Native children from the Yukon Kuskokwim (YK) Delta (in Southwest Alaska) is associated with a hospitalization rate three times higher than that reported for the general U.S. child population. Alaska Native infants reportedly experience one of the highest hospitalization rates for lower respiratory tract infection (LRTI) and RSV among U.S. children.