The Path of the Rabies Virus

The Virus Travels through the Body

From numerous studies conducted on rabid dogs, cats, and ferrets, we know that when the rabies virus isintroduced into a muscle through a bite from another animal, it travels from the site of the bite to the brain by moving within nerves. The animal does not appear ill during this time.

The Virus Reaches the Brain

Late in the disease, after the virus has reached the brain and multiplied there to cause an inflammation of the brain, it moves from the brain to the salivary glands and saliva.

Also at this time, after the virus has multiplied in the brain, almost all animals begin to show the first signs of rabies. Most of these signs are obvious to even an untrained observer, but within a short period of time, usually within 3 to 5 days, the virus has caused enough damage to the brain that the animal begins to show unmistakable signs of rabies.

Extensive studies on dogs, cats, and ferrets show that the rabies virus can be excreted in the saliva of infected animals several days before illness is apparent. Such extensive studies have not been done for wildlife species, but it is known that wildlife species do excrete rabies virus in their saliva before the onset of signs of illness. The excretion of virus may be intermittent, and the relative amount of excreted virus may vary greatly over time, before and after the onset of clinical signs.

The reason there is so much variation in the time between exposure and the onset of the disease is that many factors come into play, including the site of the exposure, the type of rabies virus, and any immunity in the animal or person exposed.

The Infectious Path of the Rabies Virus 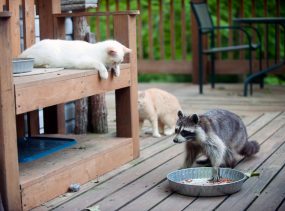