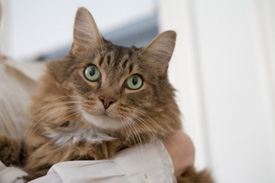 If you were bitten by a cat, dog, or ferret that appeared healthy at the time you were bitten, it can be confined by its owner for 10 days and observed. No anti-rabies prophylaxis is needed. No person in the United States has ever contracted rabies from a dog, cat or ferret held in quarantine for 10 days.

If a dog, cat, or ferret appeared ill at the time it bit you or becomes ill during the 10 day quarantine, it should be evaluated by a veterinarian for signs of rabies and you should seek medical advice about the need for anti-rabies prophylaxis.

The quarantine period is a precaution against the remote possibility that an animal may appear healthy, but actually be sick with rabies.

The likelihood of rabies in a domestic animal varies by region; hence, the need for postexposure prophylaxis also varies. In the continental United States, rabies among dogs is reported sporadically in states where there is reported rabies in wildlife.

During 2000-2004, more cats than dogs were reported rabid in the United States. The majority of these cases were associated with spillover infection from raccoons in the eastern United States. The large number of rabies-infected cats might be attributed to fewer cat vaccination laws, fewer leash laws, and the roaming habits of cats.

In many developing countries, dogs are the major vector of rabies; exposures to dogs in such countries represent an increased risk of rabies transmission.

In all instances of exposure to other domestic animal species, the local or state health department should be consulted before a decision is made to euthanize and test the animal, or initiate postexposure prophylaxis.