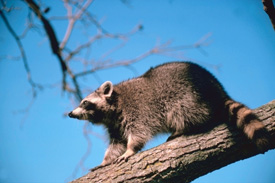 Raccoons, skunks, and foxes are the terrestrial animals most often infected with rabies in the United States. All bites by such wildlife must be considered a possible exposure to the rabies virus.

Signs of rabies among wildlife cannot be interpreted reliably; therefore, any such animal that exposes a person should be euthanized as soon as possible (without unnecessary damage to the head) and the brain should be submitted for rabies testing. If the results of testing are negative, the saliva can be assumed to contain no virus, and the person exposed does not require postexposure prophylaxis.

Small Rodents and Other Wild Animals

Small rodents (like squirrels, hamsters, guinea pigs, gerbils, chipmunks, rats, and mice) and lagomorphs (including rabbits and hares) are almost never found to be infected with rabies and have not been known to transmit rabies to humans.

From 1990 through 1996, in areas of the country where raccoon rabies was enzootic, woodchucks (groundhogs) accounted for 93% of the 371 cases of rabies among rodents reported to CDC.

In all cases involving rodents, the state or local health department should be consulted before a decision is made to initiate postexposure prophylaxis.