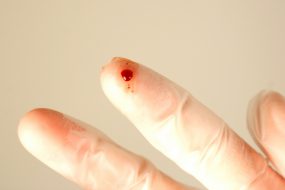 Human immunodeficiency virus (HIV), hepatitis B virus (HBV), and hepatitis C virus (HCV) are three of the most common bloodborne pathogens from which health care workers are at risk. However, bloodborne pathogens are implicated in the transmissions of more than 20 other pathogens (Beltrami et al 2000external icon). Today, co-infection with multiple bloodborne diseases and multi-drug resistant organisms, including HIV, hepatitis B or C, Methicillin resistant Staphylococcus aureus (MRSA), and co-morbidities associated with diabetes means that occupational exposure to health care workers can carry an even greater risk than in years past.

Health care workers are potentially exposed to these diseases in one of two ways:

When personal protective equipment is not readily available or accessible, employees are less likely to wear it.  This puts them at risk of exposure to blood and body fluids and vulnerability to bloodborne pathogens.

Human immunodeficiency virus (HIV) disables the body’s immune system until it is no longer capable of fighting infection. Once a person becomes immunocompromised, he or she can exhibit symptoms of weight loss, persistent low-grade fever, night sweats, and flu-like symptoms. The person is also more vulnerable to pneumonias, intestinal disorders, and fungal infections. Approximately 1 in 7 do not know they have HIV because they have not been tested. This can mean both patient and health care worker are unaware of potential exposure risks.

The estimated risk of HIV infection from a sharps injury is about 0.3 percent (1 in 300). The CDC has reported 57 documented cases and 140 possible cases of HIV transmission to U.S. health care workers between 1981 and December 2006. Of the 57 documented cases, 48 were associated with percutaneous injury (puncture/cut injury).

Hepatitis B virus can cause serious liver damage and death. Symptoms include jaundice, fever, nausea, and abdominal pain. Approximately five percent of adult patients develop chronic infection with hepatitis B, which carries an estimated 20 percent lifetime risk of dying from cirrhosis and 6 percent risk of dying from liver cancer. Individuals infected with HBV at birth have a much higher likelihood of chronic infection, with approximately 90 percent of infants and 25–50 percent of children aged one to five years remaining chronically infected with HBV after initial infection. According to the CDC, new cases of HBV have not been trending either up or down since 2012, but rather have been fluctuating at around 3,000 new cases per year. In 2016, there were 3,218 cases reported to CDC. After adjusting for under-ascertainment and under-reporting, the estimated number of new HBV infections in 2016 was 20,900.

The chance of becoming infected with hepatitis B from a sharps injury is estimated to be between six and 30 percent.  National hepatitis surveillance data shows that approximately 400 health care workers became infected with HBV in 2001. This figure represented a 95 percent decline from the 17,000 new infections estimated in 1983. The decline was largely due to the widespread immunization of health care workers with hepatitis B vaccine and the use of universal precautions and other measures required by OSHA. As mentioned above, the CDC no longer collects post-exposure seroconversion data on occupationally acquired HBV.

Hepatitis C virus causes serious damage to the liver and can be fatal. Infection can occur without symptoms or only mild ones. Baby boomers (born between 1945-1965) have the highest prevalence in the U.S. and it kills more in this generation than 60 other infectious diseases combined. Since there is no vaccine for HCV, it is a pathogen of great importance from an occupational risk point of view.

In 2016, a total of 2,967 cases of acute hepatitis C were reported to CDC from 42 states. Chronic hepatitis develops in 75-85 percent of infected individuals, with 70 percent of those patients going on to develop active liver disease. Of those with active liver disease, ten to 20 percent develop cirrhosis over the next 20-30 years and one to five percent develop liver cancer.  Among patients with cirrhosis, there is a one to five percent annual risk of hepatocellular carcinoma, and three to six percent annual risk of hepatic decompensation, for which the risk of death in the following year is 15 to 20 percent. More about this topic can be found on CDC’s Hepatits C Questions and Answers for Health Professionals page.

However, of the total acute HCV infections that have occurred annually ranging from 100,000 in 1991 to 41,200 in 2016; two to four percent have been health care workers exposed to blood in the workplace.