Impacts made by the NIOSH Commercial Fishing Safety Research Program: 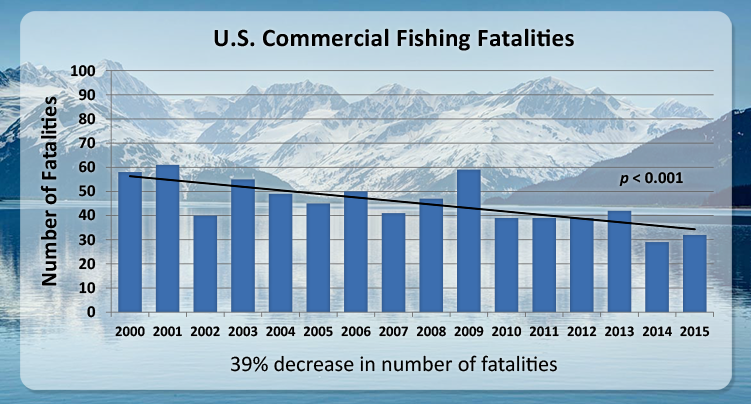 The NIOSH Commercial Fishing Safety Research Program is dedicated to providing our stakeholders high quality, relevant information that has direct impact on the safety of fishermen around the United States. The program’s research has been used by the industry, government agencies, and fishing safety advocates to inform policy decisions and educate workers about the safety hazards and solutions evaluated in the research. Here are a few of our most recent successes:

Collaboration with NPFMC on Safety Assessments

The North Pacific Fishery Management Council (NPFMC) periodically reviews the fishery management plans for federal fisheries in Alaska, and frequently asks NIOSH to prepare safety assessments of those fisheries for the Council to consider during the management plan review. During 2016, NIOSH analyzed surveillance data and prepared safety assessments for three federal fisheries that were reviewed by the North Pacific Fishery Management Council. The three safety assessments were prepared for the Bering Sea/Aleutian Islands Crab fleet, American Fisheries Act fleet, and the Halibut/Sablefish IFQ fleet.

In the commercial fishing industry 86% of fatalities are caused by drowning. In an effort to increase personal flotation device (PFD) use and reduce these fatalities among workers, NIOSH conducted a study to determine which types of commercially available PFDs resulted in the highest satisfaction in real working conditions. Results of this study were used by a PFD manufacturer to design and manufacture an innovative “tactical deck vest” that could be worn continuously on deck while also providing flotation. The vest is now commercially available.

In 2016 the Seattle Fishermen’s Memorial launched a Safety Rebate Programexternal icon in partnership with Kolstrand to encourage adoption of Emergency Stop (E-Stop) systems on purse seine vessels with capstan winches. Capstan winches were identified by fishermen as one of the most hazardous pieces of equipment used on fishing vessels. The E-Stop systemexternal icon was developed by NIOSH in 2007 and is now sold by Kolstrand. The program is Seattle Fishermen’s Memorial’s contribution to preventing traumatic injuries due to winch entanglements. The original program was funded to rebate six E-Stop systems on Seattle-based fishing vessels with the possibility of renewing the program in 2017.

NIOSH developed prototype standardized static winch guarding for three of the most prevalent winch types based on dockside surveys, with three rounds of field testing and improvement for winch model design. Owners of eleven different partner boats have agreed to participate in the Winch Safety Study, and six of nine winch guards are installed on working boats for evaluation. Two additional guards are scheduled to be installed the first quarter of 2017, with the last guard tentatively scheduled for installation in June/July 2017. So far, at least one owner/operator involved in initial testing would like to build a guard for one of his other boats based on the NIOSH guard design.

Live to be Salty – Impact

In May 2014 NIOSH launched Live to be Salty, a multi-media health communication intervention developed to reduce drownings by promoting the use of PFDs on board commercial fishing vessels. Since its release it has raised awareness among targeted high-risk fisheries in Alaska that there are comfortable PFDs available on the market that you can wear 100% of the time on deck. Program messaging also addressed fishery specific risks and common misconceptions related to cold water immersion and survival. Evaluation of the completed intervention is ongoing with results expected to be published in 2017.

In 2008-2009, NIOSH scientists conducted a study to determine which type of commercially available PFD resulted in the highest satisfactionexternal icon among commercial fishing crews in Alaska. This study showed that interventions to increase PFD use in the fishing industry should be tailored to each vessel type and focus on addressing the specific barriers to PFD use in each fishery. In order to understand barriers in each high-risk fishing fleet around the country, NIOSH scientists worked with NIOSH funded Ag Center researchers to encourage further studies focusing on improving PFD usage among fishermen. NIOSH data showed that West Coast Dungeness crabpdf iconexternal icon, Gulf of Mexico shrimpexternal icon, and New England lobstermenexternal icon were most at risk for drowning due to falls overboard or rapid vessel capsizings. Using these data to support action, three additional studies were conducted or are being conducted to identify the best available type of PFD. Each iteration of these PFD studies has identified a unique solution or barrier to PFD use. NIOSH intramural and extramural scientist have collaborated by sharing data, offering technical support, and advising on best practices to further this type of hands on research with fishermen across the country with a goal to increase the use of PFDs and ultimately prevent drownings.