On this page
Commercial Fishing Fatalities by Year and Incident Type, Gulf of Mexico, 2000–2014 (164 Total) 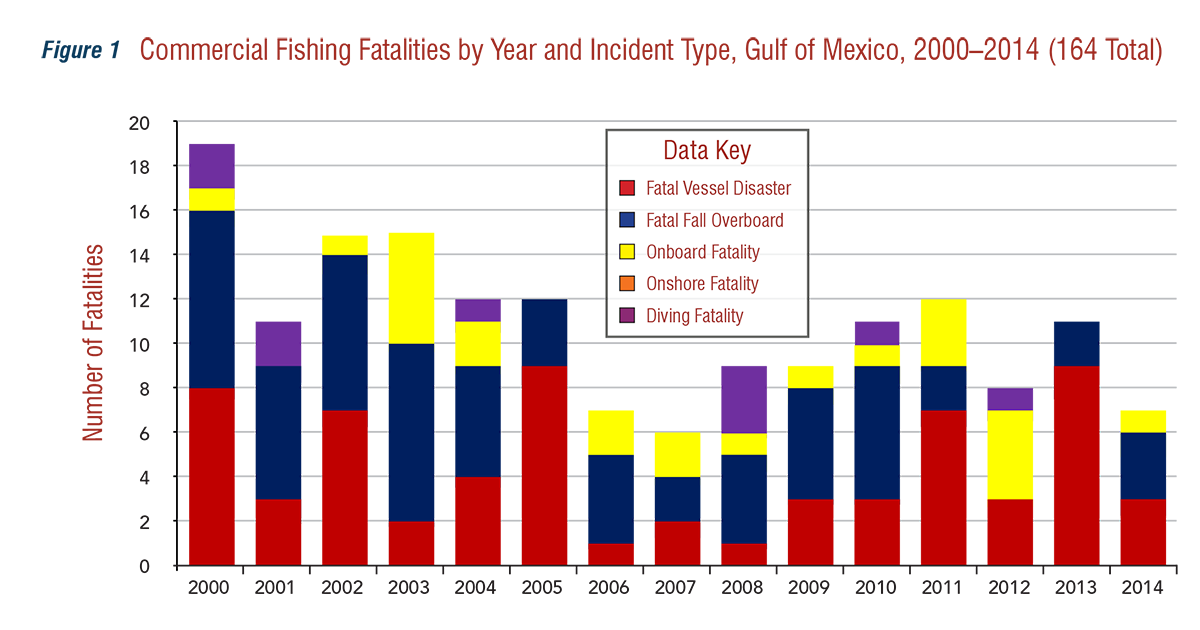 Vessel disasters are sinkings, capsizings, groundings, fires, or other events that force crews to abandon ship. Vessel disasters accounted for half of all fatalities (25, 51%) in the Gulf of Mexico during 2010–2014. The leading causes of fatal vessel disasters were collisions and allisions (striking a stationary object), flooding, and instability.

During 2010–2014, 13 crewmembers died from drowning after falling overboard, contributing to 27% of fatalities in the region. None of the crewmembers were wearing a personal flotation device (PFD) when they drowned. Over half (54%) of the falls were not witnessed by other crewmembers, either because the fishermen were alone on the vessel (1) or alone on deck (6). Fatal falls overboard were most frequently caused by losing balance or by contact with gear, including being knocked over by or becoming entangled in gear.

Of the fatal onboard injuries (9, 18%), the majority involved contact with equipment: four deaths from being caught in winches, and two deaths from being struck by a hook and by a pulley. The remaining three onboard fatalities were due to a drug overdose and two instances of assault. There are engineering controls available that can help reduce the chance of being caught in a winch

Fatalities occurred in 10 fleets in the Gulf of Mexico, with six fleets experiencing two or more fatalities (Figure 2).

The shrimp fleet had the highest number of fatalities in the Gulf of Mexico, with 25 deaths. These fatalities constituted half of all deaths in the region during 2010–2014. Among shrimp fishermen, the leading causes of death were vessel disasters, onboard injuries, and falls overboard. NIOSH recommends wearing a PFD on deck at all times. Also, there are engineering controls available that can help reduce the chance of entanglement in winches, and NIOSH is currently testing new versions of winch guards on shrimp boats in the Gulf of Mexico.

Research Highlights in the Gulf of Mexico

For more statistical information and detailed recommendations on how to keep you and your fellow crewmembers safe, open or download the full regional summary: Commercial Fishing Fatality Summary – Gulf of Mexico Region (2010-2014)