Preventing Winch Entanglements among Shrimp Fishermen in the Gulf of Mexico

In 2012, a 15-year-old deckhand on a shrimp trawler in the Gulf of Mexico lost his life after getting entangled in a winch. At the request of the US Coast Guard, NIOSH reviewed data from the Commercial Fishing Incident Database as well as US Coast Guard investigative reports to understand the risk factors associated with winch entanglements in this fishing fleet.

From 2000-2011, 35 injuries (8 fatal) involving winches were reported in the shrimp fleet fishing in the Gulf of Mexico waters. Injuries involving the main winch drums had a higher risk for fatal outcomes compared to injuries involving the winch cathead. Injuries were often fatal, where nonfatal injuries were usually severe and disabling. These results can be found in greater detail in the published CDC MMWR, “Fatal and Nonfatal Injuries Involving Fishing Vessel Winches — Southern Shrimp Fleet, United States, 2000–2011”.

NIOSH researchers conducted a series of site visits to ports around the Gulf of Mexico to determine the main areas of concern related to winch operations on shrimp vessels. After discussions with US Coast Guard staff, vessel owners, shrimp fishermen, and winch manufacturers, they identified four main activities that lead to winch entanglements on shrimp vessels: line leveling, retrieving wire rope, working the catheads, and operating the try-net winch.

NIOSH is currently addressing the unique entanglement hazards on shrimp vessels by developing static winch guards for the mechanically-driven main drum winches and an Auxiliary Stop (A-Stop) for the electric “try-net” winch.

NIOSH engineers developed static guards for each of the three types. These prototypes are now being tested on vessels throughout the Gulf of Mexico, and feedback on their performance is being used to develop improvements to each design. 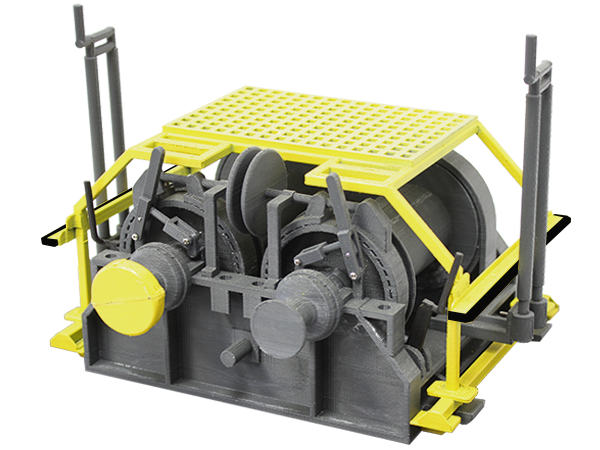 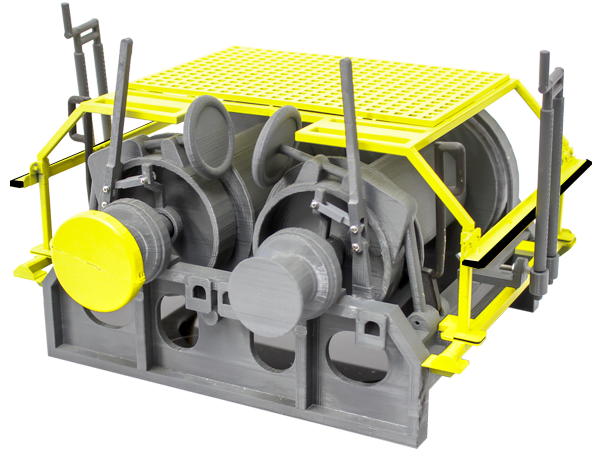 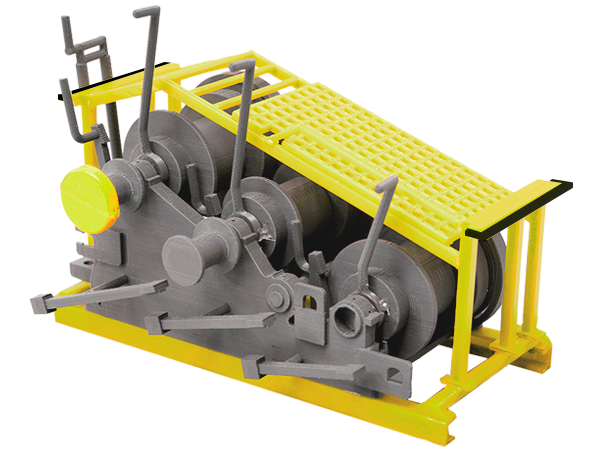 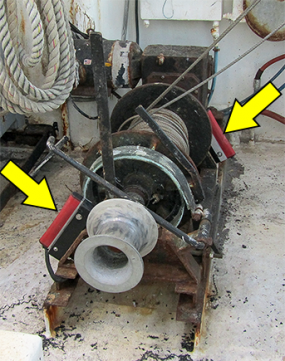 Try-net winches are small, electric-driven winches with a single, main drum and exposed cathead used to pull in a small “try-net” that allows the operator to see if the vessel is still trawling along in the shrimp. The controls for this winch are usually located on the boat’s house roof, so they are accessible to fishermen standing near the winch. In the event of a line entanglement, the controls to stop the winch are out of the fisherman’s reach.

NIOSH engineers have developed an Auxiliary Stop system with switches mounted directly on the winch housing. These bumper-style stop switches are within reach of a fisherman entangled in the winch drum or cathead. The stop switches turn off the winch motor, lessening the severity of the entanglement injury. 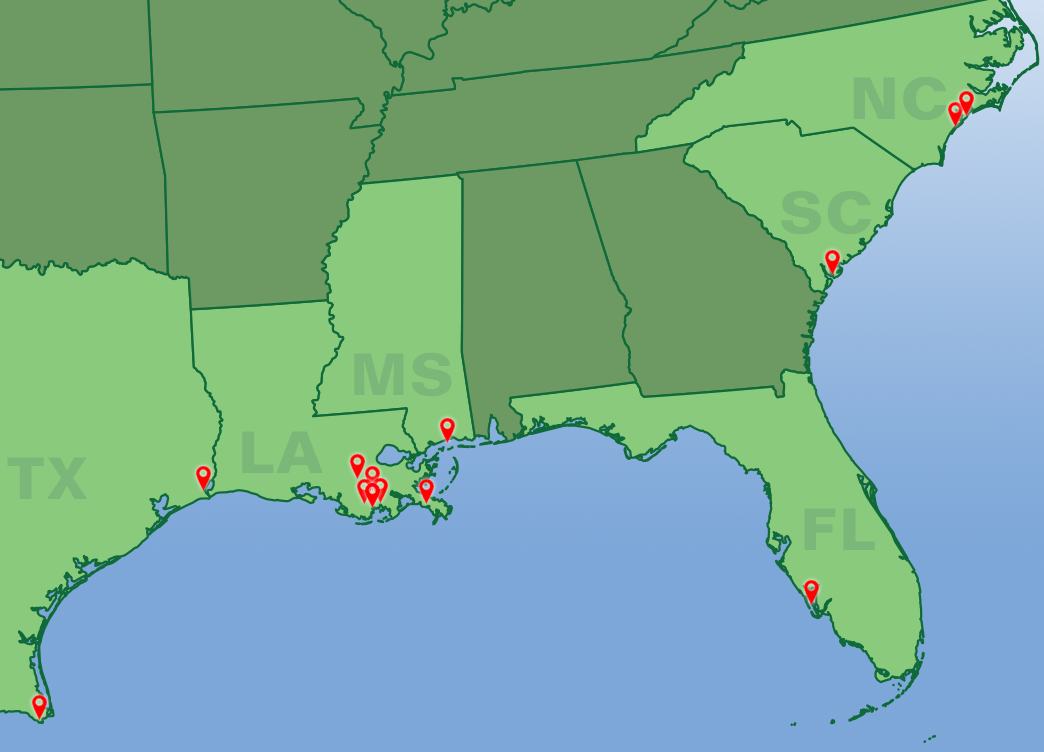 This map of the Southeastern United States marks the locations of NIOSH test boats with prototype safety systems installed. 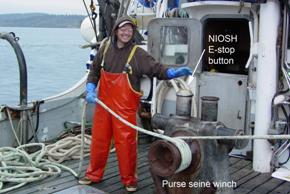 NIOSH researchers and engineers worked with purse seine fishermen on the design and testing of an emergency stop (e-stop) switch that stops the deck winch if someone becomes entangled. The e-stop system allows the winch to be stopped by a worker, even if the worker is caught in the winch. The system was successfully tested on vessels during the 2005-2007 fishing seasons and is now commercially available as a retrofit-kit from Kolstrand Marineexternal icon.

For more details, refer to the article “Reducing Commercial Fishing Deck Hazards with Engineering Solutions for Winch Design.” Watch The Most Powerful Thing, a NIOSH safety awareness video designed to help crew members be more aware of safety hazards on-board purse seining vessels. The video highlights interviews with fishermen, and the e-stop solution to prevent injuries that occur as a result of getting entangled in the winch. NIOSH also released a Fishing Safety Success Story highlighting the use of the e-stop to prevent an injury on a salmon seine vessel.

NIOSH developed a hatch and door monitoring system for commercial fishing vessels, which is inexpensive, easy to install, robust, and able to be retrofitted on existing vessels. NIOSH engineers installed and evaluated the system on two fishing vessels, which are working in Alaskan waters. In 2012, the system was licensed to Oregon-based Wapato EngineeringExternalexternal iconexternal icon to produce and market the commercial version of the monitoring system.

Two contributing factors in many vessel disasters are the uncontrolled flooding of watertight compartments and the free-surface effect of partially filled holds. Most flood alarms found in commercial fishing boats prompt pumps to operate, but do not indicate the status of the flooding or relative performance of the pumps. NIOSH engineers have developed a Flood-Rate Monitor that not only triggers the pumps but also shows the relative flood level and the rate of its increase or decrease. In function, it tells whether the pumps are gaining, maintaining, or failing to keep up with the flooding. This information is sent to the wheelhouse for the captain and crew to respond to the risk.

A fish hold or tank that is not entirely full is referred to as a “slack tank” and dangerously reduces a ship’s stability due to the “free surface effect,” a condition where water can slosh back and forth in a confined space. NIOSH engineers were alerted by fishermen that traditional float-style switches used to sense tank levels were unreliable due to their propensity to get clogged with debris. A Slack-Tank Monitor using pressure transducers to detect tank levels was designed to reduce the chances of mechanical failure due to fouling from machine oil, grease, fish slime, or debris. The first version Slack-Tank Monitor System was installed in January 2011 for testing in the Bering Sea. The second design, using virtual meter displays, was installed a fishing vessel and replaced the first test system on another vessel in the fall of 2011.