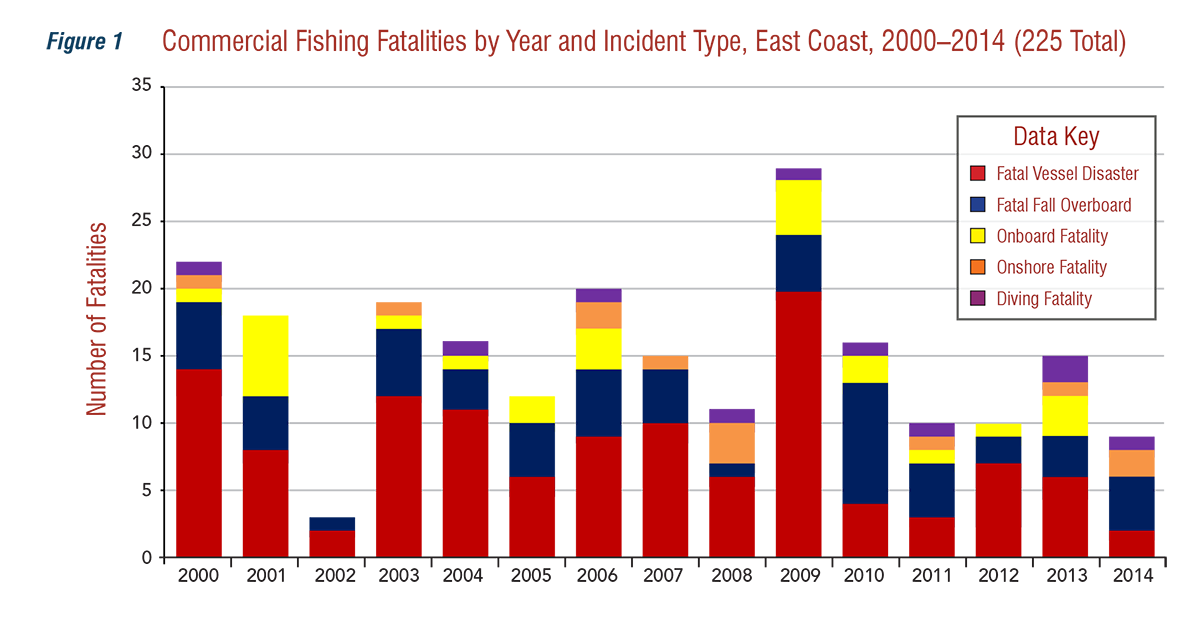 During the 15-year period 2000–2014, 225 commercial fishing deaths due to traumatic injury occurred in East Coast fisheries, averaging 15 fatalities annually (Figure 1). During the first decade (2000–2009), 165 fatalities occurred, for an average of nearly 17 deaths per year. For the most recent five-year period (2010–2014), 60 fatalities were recorded, averaging 12 fatalities annually. During 2000–2009, the majority of fatalities in the region were caused by vessel disasters; however, during 2010–2014, vessel disasters and falls overboard resulted in the same number of deaths on the East Coast.

Vessel disasters are sinkings, capsizings, groundings, fires, or other events that force crews to abandon ship. Vessel disasters were a leading cause of commercial fishing fatalities during 2010–2014 and accounted for 37% of all deaths from 2010–2014. The leading causes of fatal events were being struck by large waves and flooding.

During 2010–2014, 22 crew members died from drowning after falling overboard, contributing to 37% of fatalities in the region. None of the fishermen were wearing a personal flotation device (PFD) when they drowned. In 12 (55%) of these cases, the falls overboard were not witnessed, either because the fishermen were alone on the vessel (7) or alone on deck (5). Of the falls overboard for which causes were known, four (36%) were caused by gear entanglements.

Of the seven crew members who died from injuries sustained onboard vessels, two were due to unintentional drug overdoses and one was a suicide. The remaining onboard fatalities involved two crew members becoming entangled in equipment, one being struck by equipment, and one who suffered multiple fatal injuries after his vessel collided with a channel marker. 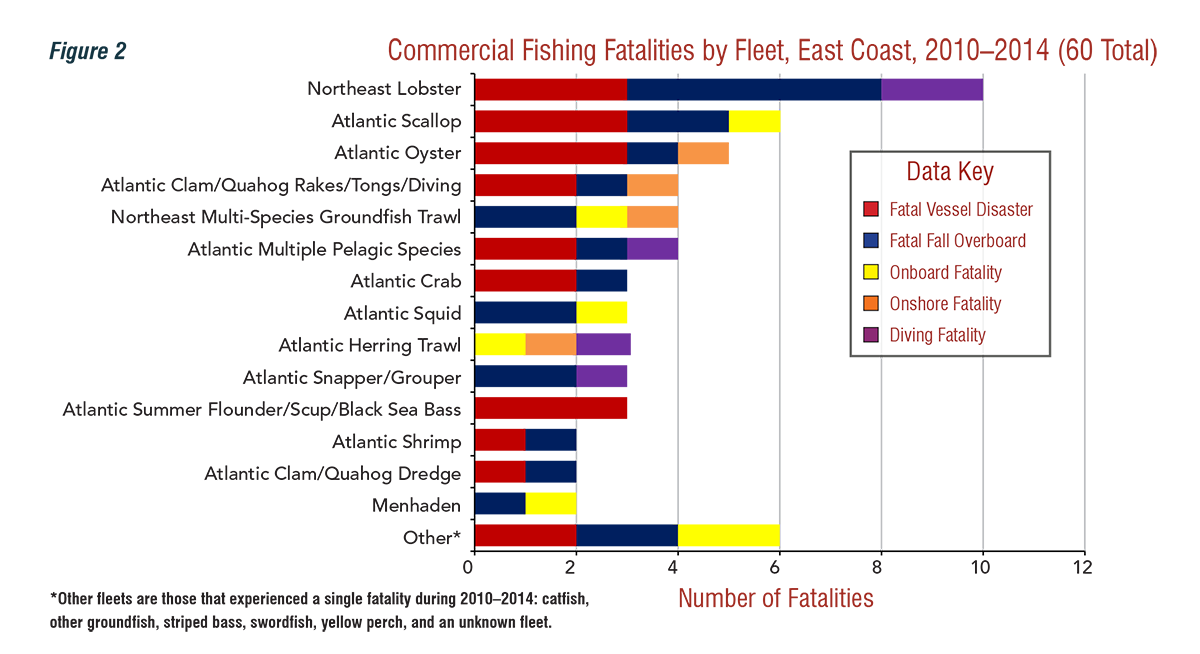 Fatalities occurred in 19 different known fisheries along the East Coast, with five contributing to almost half (48%) of the deaths (Figure 2).

Northeast Lobster
The lobster fishery had the highest number of fatalities with more deaths caused by falls overboard (5, 50%) than vessel disasters (3, 30%). There were also two deaths that occurred when divers were checking traps and lines. NIOSH recommends wearing a PFD on deck at all times. Also, there are engineering controls available that can help reduce the chance of gear entanglement specifically designed for lobstermen.

Atlantic Scallop
The second-highest number of fatalities occurred in the scallop fishery, with three deaths caused by two-vessel disasters, two deaths caused by falls overboard, and one death caused by an onboard injury.

Research Highlights on the East Coast

For more statistical information and detailed recommendations on how to keep you and your fellow crewmembers safe, open or download the full regional summary: Commercial Fishing Fatality Summary, East Coast Region (2010–2014)

For more information about other regions, visit our Alaska, West Coast, and Gulf of Mexico regional summary pages.