The National Health Survey Act, passed in 1956, provided the legislative authorization for a continuing survey to provide current statistical data on the amount, distribution, and effects of illness and disability in the United States. To fulfill the purposes of this act, it was recognized that data collection would involve at least three sources: (1) the people themselves by direct interview; (2) clinical tests, measurements, and physical examinations on sample persons; and (3) places where persons received medical care such as hospitals, clinics, and doctors’ offices.

To comply with the 1956 act, the National Center for Health Statistics (NCHS), a branch of the U.S. Public Health Service in the U.S. Department of Health and Human Services, has conducted seven separate examination surveys to collect interview and physical examination data. 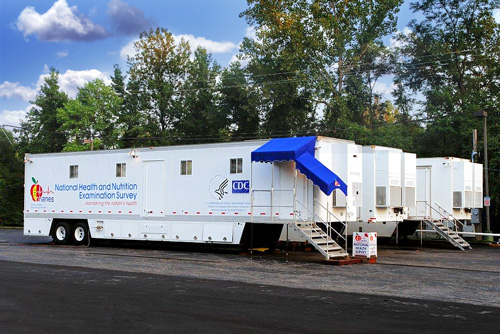 The first three of these national health examination surveys were conducted in the 1960s:

NHES I focused on selected chronic disease of adults aged 18-79. NHES II and NHES III focused on the growth and development of children. The NHES II sample included children aged 6-11, while NHES III focused on youths aged 12-17. All three surveys had an approximate sample size of 7,500 individuals.

Beginning in 1970 a new emphasis was introduced. The study of nutrition and its relationship to health status had become increasingly important as researchers began to discover links between dietary habits and disease. In response to this concern, under a directive from the Secretary of the Department of Health, Education and Welfare, the National Nutrition Surveillance System was instituted by NCHS. The purpose of this system was to measure the nutritional status of the U.S. population and changes over time. A special task force recommended that a continuing surveillance system include clinical observation and professional assessment as well as the recording of dietary intake patterns. Thus, the National Nutrition Surveillance System was combined with the National Health Examination Survey to form the National Health and Nutrition Examination Survey (NHANES). Four surveys of this type have been conducted since 1970:

NHANES I, the first cycle of the NHANES studies, was conducted between 1971 and 1975. This survey was based on a national sample of about 28,000 persons between the ages of 1-74. Extensive data on health and nutrition were collected by interview, physical examination, and a battery of clinical measurements and tests from all members of the sample.

NHANES II began in 1976 with the goal of interviewing and examining 28,000 persons between the ages of 6 months and 74 years. This survey was completed in 1980. To establish a baseline for assessing changes over time, data collection for NHANES II was made comparable to NHANES I. This means that in both surveys many of the same measurements were taken in the same way, on the same age segment of the U.S. population.

While the NHANES I and NHANES II studies provided extensive information about the health and nutritional status of the general U.S. population, comparable data were not available for many of the ethnic groups within the United States. HHANES, conducted from 1982 to 1984, aimed at producing estimates of health and nutritional status for the three largest Hispanic subgroups in the United States—Mexican Americans, Cuban Americans, and Puerto Ricans—that were comparable to the estimates available for the general population. HHANES was similar in design to the previous HANES studies, interviewing and examining about 16,000 people in various regions across the country with large Hispanic populations.

NHANES III, conducted between 1988 and 1994, included about 40,000 people selected from households in 81 counties across the United States. As previously mentioned, minority groups can have very different health status and characteristics, and thus black Americans and Mexican Americans were selected in large proportions in NHANES III. Each of these groups comprised separately 30 percent of the sample. It was the first survey to include infants as young as 2 months of age and to include adults with no upper age limit. For the first time a home examination was developed for those persons who were unable or unwilling to come into the exam center but would agree to an abbreviated examination in their homes. To obtain reliable estimates, infants and young children (1-5 years) and older persons (60+ years) were sampled at a higher rate. NHANES III also placed an additional emphasis on the effects of the environment upon health. Data were gathered to measure the levels of pesticide exposure, the presence of certain trace elements in the blood, and the amounts of carbon monoxide present in the blood.

Data collection on the current NHANES began in early 1999 and remains a continuous annual survey. Each year approximately 7,000 randomly-selected residents across the United States have the opportunity to participate in the latest NHANES. Participation in the survey is confidential, voluntary and selected participants will receive a personal interview with a standardized physical examination. The survey results provide an objective assessment of health status and help us learn about the health of people in the United States.

In addition to NHANES I, NHANES II, Hispanic HANES, and NHANES III, several other HANES projects were completed between 1982 and 1992. These projects were a part of the HANES Epidemiological Follow-up Survey, a multiphase project that conducted follow-up interviews with the NHANES I survey population in order to provide a longitudinal picture of the health of the U.S. population.