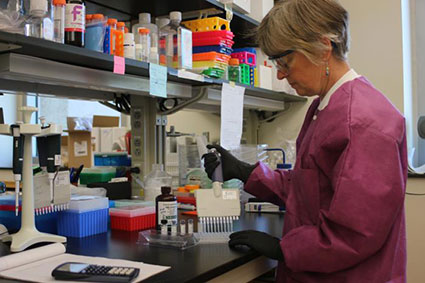 The following example shows how DVBD is improving diagnostic tests.

Problem: Most people have heard of Lyme disease, but not as many are familiar with Rocky Mountain spotted fever (RMSF), the world’s deadliest tickborne disease. Its name is a bit misleading since more than 60% of reported cases occur in five states (North Carolina, Tennessee, Oklahoma, Arkansas, and Missouri). Spread through the bite of an infected tick, RMSF can be deadly if not treated within days of infection.

Current testing is tricky, so many treated cases are never confirmed and reported to CDC.

RMSF is diagnosed and treated based on the suspicions of a patient’s doctor and is confirmed using blood tests after treatment has already begun. The results of these tests can take weeks, so healthcare providers who suspect RMSF are advised to recommend antibiotic treatment before test results are available.

Innovation: After nearly 10 years and countless hours of work, CDC scientists have received US Food and Drug Administration (FDA) clearance for a real-time PCR test for a family of bacteria called Rickettsia, which causes RMSF and other diseases. This real-time PCR (or polymerase chain reaction) test can be used to more quickly identify Rickettsial DNA in blood samples.

Currently, the most common way to confirm a diagnosis of RMSF is to look for antibodies in two blood samples—one taken during the first week of illness, and the second 2 to 4 weeks later. Most patients never return to give the second blood sample, so a vast majority of RMSF cases are never confirmed. An advantage of the PCR test is that it can detect rickettsial DNA in whole blood, without the need for multiple tests. By getting FDA clearance, CDC now can make the test available to a wide variety of laboratories in the Laboratory Response Network, increasing testing capacity and allowing for a more timely diagnosis of RMSF and other diseases.