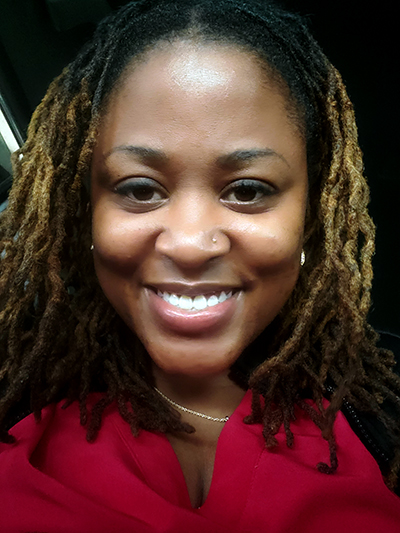 Tasha Hines is 39 years old, married, and a registered nurse at an internal medicine outpatient clinic. She also has sickle cell disease. Tasha was diagnosed through newborn screening. The news of her sickle cell diagnosis came as a surprise to her parents who later learned they both carried the trait for sickle cell disease, as does Tasha’s older sister.

Growing up with sickle cell disease, Tasha experienced a lot of pain.  These episodes of pain are commonly referred to in the sickle cell community as “a pain crisis.” Tasha’s mother was always worrying about her doing certain things when she was growing up. “She was scared when I took my first flight. She was scared when I had a headache. She would automatically think I was having a pain crisis.“  In 2010, Tasha experienced a major pain crisis which resulted in her being hospitalized for 9 days. The doctors told her she had pneumonia and her hemoglobin was very low. Tasha was told by her medical team that she would need to have a blood transfusion. At first, Tasha refused the transfusion. “Up to that point, I had never received blood in my life, and I didn’t want anyone else’s blood in my body,” she said.  However, her father was concerned for her safety and wellbeing and convinced her to go through with the procedure.

Tasha has been very fortunate and has been able to live a full life because of how she manages and approaches life with sickle cell disease. “Luckily, I’ve been able to do all the things that others who don’t have sickle cell can do.” She tries to watch her diet, stays hydrated, takes folic acid, and takes steps to manage her stress. She also makes sure she gets enough rest and usually doesn’t need anything more than Tylenol to manage her pain. “I know my limitations. If I have any pain, I know to stop.” In addition, she makes sure to visit her hematologist (a doctor who specializes in blood disorders) once a year.

Tasha said that living with the condition also has influenced her career choice as an adult. “Having sickle cell disease is what led me into the healthcare field, even though my mother didn’t want me to pursue nursing. She thought it was too strenuous and wanted me to have a sit-down job.”

Tasha wants others to know that sickle cell disease is manageable if you are aware of your lifestyle and how it contributes to your health. Some tips she offers for others with sickle cell include the following:

CDC thanks Tasha for sharing her story.