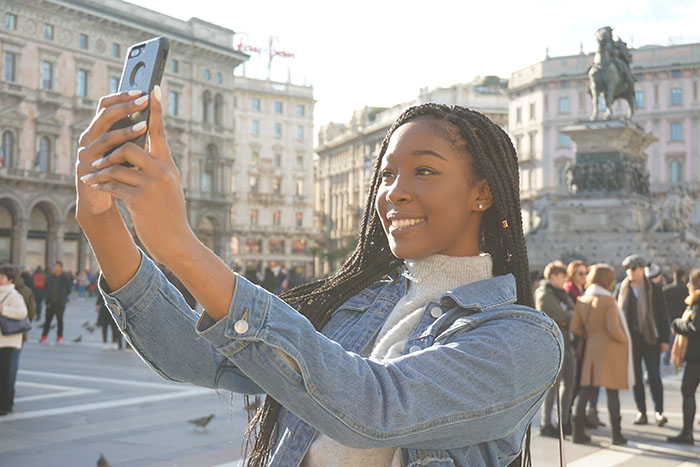 When both parents have sickle cell trait (SCT), there is a 1 in 4 chance that each of their children will have sickle cell disease (SCD). For Fatimah’s mother and father, who both have SCT, their first daughter (Fatimah’s older sister) was born with SCD; 7 years later, Fatimah was also born with SCD. “I don’t think they were expecting both kids to have SCD. I know it’s hard on them because they feel bad that we have the condition,” said Fatimah, a college senior at the University of Illinois, Urbana-Champaign.

Although both Fatimah and her older sister have SCD, the disease (illness) affects them differently. “My sister would get pain crises (acute episodes of pain) every now and then, but it’s really me who has the real issues with SCD. For me, I would be in and out of hospitals all the time. I had really bad pain crises, and I would get really bad headaches and pain in my stomach. I get sick a lot,” said Fatimah.

When Fatimah was around 7 years old, she experienced a terrible pain crisis. Her parents gave her medicine, but she wasn’t responding to the medication. Her pain and health continued to worsen. They took her to the emergency department (ED) for treatment. While in the ED, her heart rate dropped, and doctors treated her to bring her heart rate back to normal. “When I woke up in the morning, I needed to go to the bathroom. When I got up, the whole right side of my body gave out; I just collapsed on the floor.” At 7 years old, Fatimah had suffered a stroke, and she was in the hospital for several months. “Somehow, by some miracle, I regained everything. Looking at me now, you wouldn’t know that I had a stroke,” said Fatimah.

For Fatimah, frequent visits to the hospital and ED was a part of her childhood. Growing up, she didn’t realize that other people didn’t experience the same health problems she did. “In high school, I learned that everyone doesn’t get sick the way I do.” The hardest part about growing up was coming to terms with the fact that sometimes it was harder for her to engage in certain activities, like cheerleading, compared to her friends. “My parents always told me to take a break [when cheerleading] if I ever got tired, but I would try to push through it unless it got to the point that I really couldn’t anymore. If it got to that point, then I would let my team and coach know.”

Despite the health challenges she faced, Fatimah never wanted her SCD to influence who she was and what she could achieve. “I want to showcase the fact that you can have SCD but can also do everything else. My older sister is studying to be a doctor because of me. She is studying hematology and doing sickle cell research. She told me she met a patient one day in her clinical rotations, and the patient, who also has SCD, was surprised my sister was going to school and becoming a doctor. She told me the patient was asking her, ‘you’re going to school? You’re going to be a doctor? How do you manage (take care of) it?’ The way my sister described it, the girl was so interested in knowing because she puts so much work into her health that she didn’t know it could be possible to also do other things, too. I don’t think that having a medical condition should keep her from doing what she wants. It’s just one obstacle you have to face, but you don’t have to stop everything you’re doing,” said Fatimah.

When Fatimah was in her junior year of college, she decided to study abroad in Milan, Italy, despite her parents’ concerns. She was interested in fashion and modeling, and she wanted to take the opportunity to explore Milan, a fashion capital, and absorb the rich culture the city had to offer. “My parents were worried about finding a doctor in Italy and how I was going to stay healthy, but I could figure that stuff out. Why miss out on an opportunity to live in another country?” Once in Italy, Fatimah was able to find a doctor, but she admits it was challenging to receive care away from home. “It was the first time I went to a doctor by myself, and it was in a different country, too. They didn’t speak English. I was scared. I was comparing myself, thinking about how my friends don’t have to worry about finding a doctor and going to a hospital. I had to be up at 4am to be on the train and be at the hospital for my appointment.” Despite the challenges she faced abroad, Fatimah doesn’t regret her decision to spend a semester in Italy. She kept her spirits up by putting her healthcare needs into perspective. “I have to do these extra things to stay healthy, but at the same time, it’s that little sacrifice. It’s just one day out of the month, and I don’t have to let it impact the other days.”

Fatimah is expected to graduate as a finance major in May 2019. She has already accepted a full-time job at JP Morgan Chase, which she will begin after graduation, but she plans to continue pursuing her dreams in travel, blogging, and fashion as well. Fatimah wants to encourage other people like her who are living with SCD to know that they can live a full life. “We can still achieve whatever we want to do, whatever we put our minds to. Yeah, you have to deal with something that not everybody has to, but at the end of the day, you’re still here, and you’re still healthy for the most part. So if you’re able to go through your day, then know that it’s one thing you have to deal with, but don’t let it be everything and the deciding factor for you.”

CDC would like to thank Fatimah for sharing her story.