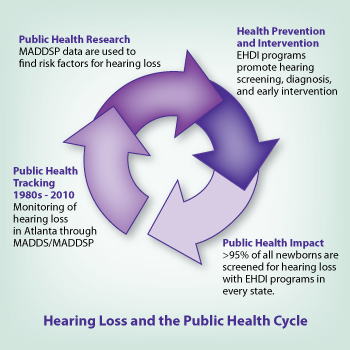 Tracking (also called surveillance) is a powerful tool used to determine who among the general population has a particular condition or disability and how many such individuals are affected. Tracking also is used to find changes among these groups over time. While the findings of the tracking studies that we at CDC conduct often identify research questions to pursue, results from these efforts also can directly inform intervention and prevention strategies. These studies tell CDC who might be more at risk for developing a condition or what might make someone less likely to have it. When we understand who is at risk or what protects someone from a condition, then we have a better idea of what prevention or intervention programs will work. The public health cycle begins again when we use tracking to help us monitor the effects of a particular intervention or prevention program.

In the early 1980s, CDC implemented the first population-based tracking of multiple developmental disabilities (including hearing loss) in the United States—the Metropolitan Atlanta Developmental Disabilities Study (MADDS). MADDS found that approximately 1 of every 1,000 children 10 years of age had a bilateral hearing loss of more than 40 decibels.1

By the early 1990s, CDC had built upon the success of MADDS to implement ongoing tracking of selected developmental disabilities. The Metropolitan Atlanta Developmental Disabilities Surveillance Program (MADDSP) continued the work of MADDS in tracking hearing loss, vision loss, cerebral palsy, and intellectual disability. Scientists at CDC recognized the utility of MADDSP in learning the age of first identification among children with hearing loss in an effort to promote the importance of early identification. MADDSP data from 1991 through 1993 showed that, among children with congenital sensorineural hearing loss, the average age at earliest known diagnosis was 2.9 years; only 8% of those children had their hearing loss diagnosed before they were 1 year of age. Those findings were used to support the initiation of programs and legislation to promote universal newborn hearing screening to assess hearing function of infants before they leave the hospital. Currently, there is extensive evidence supporting the importance of early intervention for children with hearing loss in improving language skills and communication.

MADDSP is the only population-based tracking program for hearing loss in the United States. We are able to use tracking tools, through MADDSP, to measure the effects of prevention and intervention efforts on the prevalence of hearing loss and use of special education services. Early Hearing and Detection Intervention (EHDI) programs promote early infant hearing screening, timely follow-up evaluations, and early intervention services. Today, newborn hearing screening is conducted in all 50 states, U.S. territories, and the District of Columbia, and over 95% of all newborns are screened. In addition to state efforts, EHDI is supported by a wide range of federal agencies, advocacy groups, professional groups, and the public. Early identification and intervention can help children with hearing loss to maximize their communication and language development.