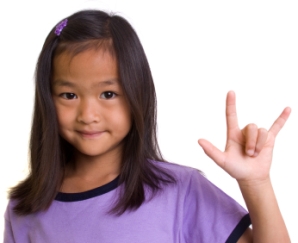 People with hearing loss and their families often need special skills to be able to learn language and communicate. These skills can be used together with hearing aids, cochlear implants, and other devices that help people hear. There are several approaches that can help, each emphasizing different language learning skills.

Following are language approaches, and the skills that are sometimes included in each of them:

American Sign Language (ASL) is a language itself. While English and Spanish are spoken languages, ASL is a visual language.

Like any other language, ASL must be learned. People can take ASL classes and start teaching their baby even while they are still learning it. A baby can learn ASL as a first language. Also, experts in ASL can work with families to help them learn ASL.

Manually Coded English (MCE) is made up of signs that are a visual code for spoken English. MCE is a code for a language — the English language. Many of the signs (hand shapes and hand motions) in MCE are borrowed from American Sign Language (ASL). But unlike ASL, the grammar, word order, and sentence structure of MCE are similar to the English language.

Children and adults can use many other communication tools along with MCE. One that is commonly used is finger spelling, which is used to spell out words that don’t have a sign in MCE — such as names of people and places. [View Video Clip]

Conceptually Accurate Signed English (CASE) (sometimes called Pidgin Signed English (PSE)) has developed between people who use American Sign Language (ASL), and people who use Manually Coded English (MCE), using signs based on ASL and MCE. This helps them understand each other better. CASE is flexible, and can be changed depending on the people using it.

When watching a person’s mouth, many speech sounds look the same on the face even though the sounds heard are not the same. For instance, the words “mat,” “bat,” and “pat,” look the same on the face even though they sound very different. When “cueing” English, the person communicating uses eight hand shapes and four places near the mouth to help the person looking tell the difference between speech sounds. Cued Speech allows the person to make out sounds and words when they are using other building blocks, such as speech reading (lip reading) or auditory training (listening). [View Video Clip] 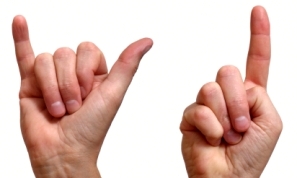 With Finger Spelling the person uses hands and fingers to spell out words. Hand shapes represent the letters in the alphabet. Finger Spelling is used with many other communication methods; it is almost never used by itself. It is most often used with American Sign Language (ASL), Conceptually Accurate Signed English (CASE), and Manually Coded English (MCE) to spell out words that don’t have a sign, such as the names of places or people. [View Video Clip]

“Natural Gestures” — or body language — are actions that people normally do to help others understand a message. For example, if a parent wants to ask a toddler if he or she wants to be picked up, the parent might stretch out her arms and ask, “Up?” For an older child, the parent might motion with her arms as she calls the child to come inside. Or, the parent might put a first finger over her mouth and nose to show that the child needs to be quiet.

Most people who are deaf or hard-of-hearing have some hearing. This is called “residual hearing.” Some people rely or learn how to maximize their residual hearing (auditory training). This building block is often used in combination with other building blocks (such as hearing aids, cochlear implants, and other assistive devices).

Speech or learning to speak is often used in combination with hearing aids, cochlear implants, and other assistive devices that help people maximize their residual hearing. A person with some residual hearing may find it easier to learn speech than a person with no residual hearing. Since speech can only be used by a person to express him or herself other building blocks, such as hearing with a hearing aid, must be added in order to help the person understands what is being said so they can communicate with others.

Speech Reading (or lip reading) helps a person with hearing loss understand speech. The person watches the movements of a speaker’s mouth and face, and understands what the speaker is saying. About 40% of the sounds in the English language can be seen on the lips of a speaker in good conditions, such as a well-lit room where the child can see the speaker’s face. But some words can’t be read. For example: “bop,” “mop,” and “pop,” look exactly alike when spoken. (You can see this for yourself in a mirror). A good speech reader might be able to see only 4 to 5 words in a 12-word sentence.

Children often use speech reading in combination with other tools, such as auditory training (listening), cued speech, and others. But it can’t be successful alone. Babies will naturally begin using this building block if they can see the speaker’s mouth and face. But as a child gets older, he or she will still need some training.

Sometimes, when talking with a person who is deaf or hard-of-hearing, people will exaggerate their mouth movements or talk very loudly. Exaggerated mouth movements and a loud voice can make speech reading very hard. It is important to talk in a normal way and look directly at your child’s face and make sure he or she is watching you.