What are appropriate play skills for a child Mark’s age? 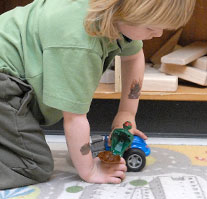 Play in a Child with ASD video icon

Play in a Child with ASD

This video demonstrates the interaction between a child and therapist who is encouraging appropriate play. Early warning signs of ASD can be seen, such as lack of joint attention and social engagement. Inappropriate play with a toy is also demonstrated through preoccupation with parts of the toy and lack of pretend play.

What are the concerning aspects of language development in this case, and what would you optimally like to see in a child’s language skills by 24 months of age?

Communication delays consisting of the absence of speech are usually fairly obvious. However, more subtle abnormalities with pre-speech can be early warning signs of ASD. These include:

As children develop speech, scripted speech can be an early warning sign of ASD.

Scripted speech is when a child repeats a word or phrase he has heard elsewhere, such as from a television program or movie. The child uses the phrase out of context, and it is not used in an attempt to communicate.

For example, when a child is asked, “How are you doing?”, he may state, “Don’t worry, tomorrow we’ll be back for more frolic and fun,” which is a quote from a television show.

Echolalia can be an early warning sign of ASD.

Echolalia, sometimes called parroting, is defined as the repetition of someone else’s speech. When the repetition occurs immediately, it is called “immediate” and when it occurs hours, days or weeks later it is called “delayed.” The child may repeat the speech in the same intonation in which it was heard.

An example of this is that the child may hear his mother say, “Do you want juice?” and then the child promptly says “juice?”

Watch the videos to compare…

This video shows a characteristic of ASD known as echolalia.

This video shows typical speech and language, including age appropriate conversation between a toddler and mother.

As children develop speech, using words out of context can be an early warning sign of ASD.

Using words out of context (using “pop-up” words) is an instance where words are said without any communicative intent and without any stimulus. A child may use one “pop-up” word for several days or weeks and then stop using it.

For example, a child may state “train” several times per day for a period of time, and then, suddenly stop using the word. The child does not direct his speech toward others when saying the “pop-up” word.

For a typically developing 2-year-old child, you would like to see the child:

The early warning signs for ASD include concerns regarding a child’s social skills, communication, and restricted or repetitive patterns of behaviors, interests, activities, and emotional regulation.

Some red flags Mark shows include:

Some other warning signs that indicate a child should be evaluated include:

Developmental or behavioral regression should always be taken seriously. When regression occurs in association with ASD, motor skills are generally preserved.

Developmental or behavioral regression describes a significant loss of previously acquired milestones or skills. Although some debate exists regarding the accuracy of parental reports regarding regression, it is generally believed that regression occurs in minority of children with ASD. The mean age at which parents report autistic regression is 20 months.

The most frequently reported aspect of regression is loss of language, followed by loss of social-emotional connectedness.