Making a Diagnosis of Autism Spectrum Disorder - A Closer Look

What are the key elements of your discussion with Billy’s mother?

What are the usual components of a diagnostic evaluation for ASD?

paper icon
Components of a Comprehensive Evaluation for ASD [126 KB, 1 Page, Print Only] 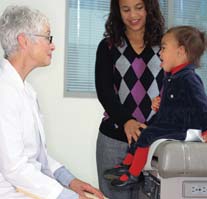 Assessment of functioning across all developmental domains. Common tests in use (depending on child’s age and abilities) that may be performed by a variety of specialists on a multidisciplinary team include:

Clinical expertise with review of the DSM-5 criteria must be used to interpret the results of the objective tests. Commonly used tools include the following:

What is the medical/genetic workup for a child with suspected ASD?

The approach to the genetic workup of a child with suspected or confirmed ASD has become increasingly complex as the diagnostic options available have rapidly evolved. With the introduction of newer technologies, the reported “yield” rates of genetic evaluations have increased, and are currently estimated to be about 15% (with some reports suggesting rates as high as 40%). Evaluations should always be customized, taking into account the clinical findings, family interest, cost, and practicality. 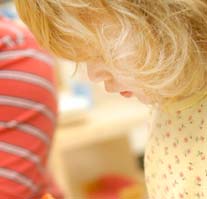 Additional tests may be performed based on the clinical presentation. A selected few include:

What are the core features of ASD?

The diagnostic criteria for autism and related disorders have undergone many revisions since the term “infantile autism” first appeared in the DSM-III in 1980.

Impairments in Social Interactions and Communication(Social)

All children on the autism spectrum share an inherent difficulty in their ability to relate socially to, or connect with, others. Children with ASD may prefer to be alone, make poor eye contact, and have difficulty interpreting the facial expressions of others. They often don’t respond to bids for their attention, and conversely, may rarely attempt to gain the attention of another.

Deficits in joint attention are characteristic of children with ASD, as is a lack of “shared affect” (sharing one’s emotional state with another, e.g., through a smile) and “showing” behaviors (taking an object over to another in order to share their interest in it with them).

Although delayed speech is often the first concern to be raised by parents, it is not a primary diagnostic characteristic of ASD. Instead, if the social use of communication is lacking, it would be important to evaluate for ASD.

At any level of verbal language, the child usually has challenges in nonverbal or social use of language. For example, he or she may not use gestures or eye contact to regulate social interaction. Language may be atypical, and lacking in communicative intent.

Because of their difficulties with these basic building blocks of social behavior, children with ASD often have great trouble in forming relationships and making friends.

This video demonstrates a contrast between two twins, one with early warning signs of autism and one without, as they interact with their mother.

Impairments to Eye Contact and Response to Name video icon

Shows red flags of autism: no response to name, lack of eye contact. 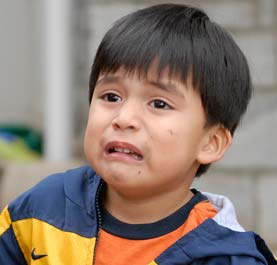 Children with ASD often demonstrate a range of behaviors that are atypical, appear purposeless, and tend to be performed in a repetitive fashion. Motor stereotypes include behaviors such as hand flapping, unusual finger movements, rocking, and spinning. Language may be characterized by abnormal tone and prosody (pitch, intonation, stress, and rhythm used in speech “echolalia” (repeating or “echoing” words for phrases), or “scripting” (e.g., repeating lines from a favorite TV show). Play is often perservative in nature and may be limited to lining toys up or spinning or mouthing objects. Children with ASD may adhere to strict routines in their daily lives and will often have a tantrum when the routine is disrupted. They may develop preoccupations and attachments with atypical objects, such as a piece of paper or string. For some children, restricted interests are often manifested in their obsession with certain topics (e.g., dinosaurs or the solar system).

This video shows early warning signs of ASDs: lack of joint attention and social engagement, inappropriate play with a toy (preoccupation with parts of the toy), lack of pretend play.

Co-occurring conditions, while not part of the core features of ASD, may occur frequently in children with ASD. Some of these include:

What are the DSM-5 criteria for ASD? 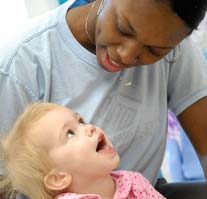 Persistent deficits in social communication and social interaction across multiple contexts, as manifested by the following, currently or by history:

Restricted, repetitive patterns of behavior, interests, or activities (RRBs) as manifested by at least 2 of 4 symptoms currently or by history.

New to the DSM-5 diagnostic criteria for ASD are severity ratings of the two symptom domains and the inclusion of clinical specifiers.
The severity ratings for the Social and RRB domains are based on the type and degree of impairments and level of support needed in these areas.
Specifiers provide more clinically-relevant information about the child’s history and functioning; they include information about